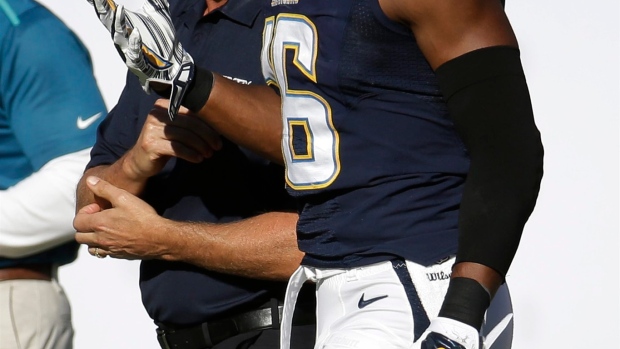 NEW YORK, N.Y. - San Diego Chargers wide receiver Seyi Ajirotutu was fined $27,562 by the NFL on Friday for making contact with an official during the team's loss to the Miami Dolphins last Sunday.

Ajirotutu was ejected in the third quarter after it was determined he touched a referee while in a scrum with a Dolphins player.

It was also a costly Friday for the Baltimore Ravens, who had four players fined a total of $44,804.

Linebacker Courtney Upshaw was fined $20,000 for roughing the passer after striking Pittsburgh quarterback Ben Roethlisberger late and in the neck area. Ravens linebacker Terrell Suggs was docked $8,268 for unnecessary roughness when he hit Steelers running back LeGarrette Blount late.

Linebacker Albert McClellan was also fined $8,268 for a late hit during a punt return, and Ravens centre Jeremy Zuttah was docked the same amount for unnecessarily striking an opponent when he hit Steelers defensive end Cam Heyward.

Washington fullback Darrel Young has to pay $22,050 for an illegal blindside hit against Minnesota.

Carolina linebacker Thomas Davis was also fined $16,537 for his hit on New Orleans tight end Jimmy Graham. Davis hit Graham under his chin away from the play, which was an interception thrown by Drew Brees.