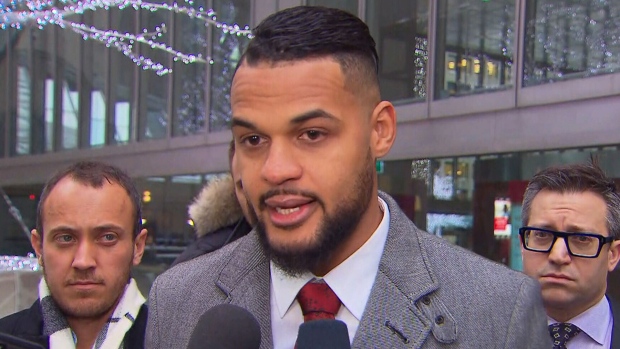 Former NHL player Akim Aliu met with the league at its Toronto offices on Tuesday and believes that positive things will come out of his incident with now-former Calgary Flames head coach Bill Peters.

According to TSN Senior Hockey Reporter Frank Seravalli, some of the topics discussed in Tuesday's meeting included: a comprehensive harassment and discrimination policy, whistleblower and retaliation protection for players, encouraging more diversity and inclusion and breaking the culture of silence.

Seravalli adds that Aliu was represented in the meeting by Jim Bunting from Toronto-based Tyr and Ben Meiselas from Geragos & Geragos, the same US-based firm that has represented Colin Kaepernick in his dealings with NFL.

Sounds like Akim Aliu and #NHL would like to find a way to potentially work together collaboratively to bring change to the game. Today’s hour-long meeting in Toronto with Gary Bettman and Bill Daly was productive. [1/3]

Aliu was represented in the meeting by Jim Bunting from Toronto-based Tyr and Ben Meiselas from Geragos & Geragos, the same US-based firm that has represented Colin Kaepernick in his dealings with NFL. [3/3]

"I want to thank everyone for their support, it obviously means a lot to me," he told reporters in a statement after the meeting. "It's been a tough week, but we had some great discussions with Gary (Bettman) and Bill (Daly).

"They couldn’t have been kinder and receptive to the message we're trying to bring. I think there is some big change coming. It's long overdue, and I'm excited to see it come to fruition."

Met with NHL. Hoping for big change. Thanks everyone for the support. #TimeToDream

It was Aliu's first statement since last Thursday when he reacted to Peters' letter of apology to the Flames organization, saying he found it to be, "misleading, insincere and concerning."

Aliu tweeted last week that Peters directed racial slurs towards him when both were with the American Hockey League's Rockford IceHogs - the Chicago Blackhawks' top farm team - in 2009-10.

The Flames announced last week that the team accepted Peters' letter of resignation.

The NHL also made a statement after their meeting with Aliu on Tuesday, saying, "We are pleased to have met with Akim Aliu today and had a productive and candid conversation. Today's discussion is part of a broader, thorough review and process that the league is undertaking.

"We share a mutual objective: ensuring that hockey is an open and inclusive sport at all levels. The League will have no further comment after the Board of Governors meeting next Monday and Tuesday."

The NHL Coaches' Association made a statement shortly after as well.

"We believe the NHL is a league built on hard work, respect and teamwork. It is a coach's job to understand how best to motivate players while respecting them as individuals and valuing them as people. Coaching philosophies differ from coach to coach, and season to season, but there are lines that cannot be crossed and there is certainly no room in the NHL, or anywhere else, for abusive behavior of any kind. The National Hockey League, including management, players, and coaches, has evolved, and the NHLCA is committed to working with the NHL and NHLPA to ensure respectful working environments for everyone."