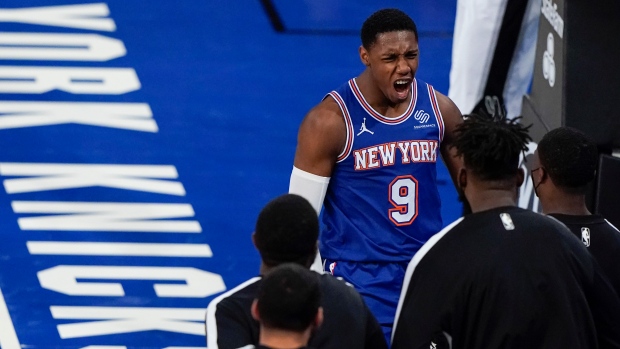 NEW YORK (AP) — Alec Burks scored a season-high 30 points in his return from a three-game absence and the New York Knicks kept up their chase of home-court advantage in the playoffs by rallying to beat the San Antonio Spurs 102-98 on Thursday night.

Julius Randle had 25 points, nine rebounds and nine assists for the Knicks, who are a half-game behind Atlanta as they battle the Hawks and Miami for the No. 4 seed in the Eastern Conference.

RJ Barrett scored 19 of his 24 points in the second half for the Knicks, who clinched their first postseason berth since 2013 on Wednesday when Boston lost in Cleveland. The Knicks acknowledged the achievement on the overhead video board during a timeout in the first quarter, drawing a cheer from the crowd.

DeMar DeRozan scored 27 points for the Spurs, who failed for the second straight night to clinch the final spot in the Western Conference play-in tournament. They still could secure the spot later Thursday if Sacramento lost to Memphis.

San Antonio opened a 17-point lead in the third quarter but struggled to contain Burks and Barrett.

Burks, who missed three games with a bruised left knee, converted a tiebreaking three-point play that made it 93-90 with 3:16 left. DeRozan made a basket but Burks followed with a 3-pointer for a four-point lead, and he sank a pair of free throws with 7.7 seconds to go after the Spurs cut it to one.

The game was originally scheduled for Feb. 20 but postponed along with three other games on the Spurs' annual rodeo road trip because of coronavirus reasons.

The Knicks got the first basket of the third quarter to go ahead 48-43, but the Spurs outscored them 32-10 over the next nearly eight minutes to open a 75-58 lead when Rudy Gay made three free throws with 3:45 remaining in the period.

Barrett scored 11 points from there to the end of the period as the Knicks cut it to four, then he and Burks opened the fourth with 3-pointers as New York went back ahead 79-77.

Spurs: Dejounte Murray had 14 points, nine rebounds and seven assists. ... Luka Samanic was out after breaking a bone in his left hand in Brooklyn.

Knicks: Randle was presented his Eastern Conference player of the month award for April before the game. ... Derrick Rose sat out to rest his left ankle ... Kentucky coach John Calipari, who coached the Knicks' Randle, Quickley, Nerlens Noel and Kevin Knox II with the Wildcats and Rose at Memphis, attended the game.

Though largely focusing on the work ahead, coach Tom Thibodeau said he understood what a playoff berth meant to young Knicks fans who haven't seen many.

“I think having grown up in Connecticut and being here in the '90s with the Knicks and knowing what basketball means to this city, it’s great,” said Thibodeau, an assistant to Jeff Van Gundy when the Knicks lost to Gregg Popovich and the Spurs in the 1999 NBA Finals.

Popovich said people who know Thibodeau were smiling in respect, knowing he would turn around the Knicks after he did so previously in Chicago and Minnesota.

“It’s like night comes after the day, and he went and did it again and we’re thrilled for him,” Popovich said. “He’s brought respect to the basketball team and the organization. He's made it a winning culture so he’s been awesome.”