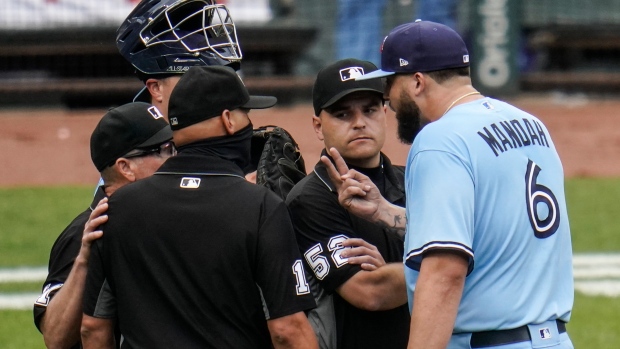 Toronto Blue Jays rookie Alek Manoah has been handed a five-game suspension for intentionally throwing at Baltimore's Maikel Franco over the weekend, it was announced Tuesday.

Alek Manoah gets 5-game suspension and undisclosed fine for intentionally throwing at Maikel Franco, MLB announces.
Charlie Montoyo was also handed a one-game ban, which he will serve tonight, according to the release.
Manoah is appealing. #BlueJays

The right-hander is appealing his suspension and his discipline will be held in abeyance until the process is complete.

Manager Charlie Montoyo was also given a one-game ban "for Manoah's actions" by MLB, which he will serve Tuesday night in Miami against the Marlins.

“I don’t agree with it, but that’s the rule. I haven’t had a chance to talk to Alek yet," Montoyo told reporters Tuesday.

Already trailing in the fourth inning of Saturday's start, Manoah allowed back-to-back homers to Ryan Mountcastle and DJ Stewart to make things 5-2 for the Orioles. Next up was Franco, who Manoah drilled with a 94 MPH fastball high and tight. Franco and Manoah appeared to exchange words while the right-hander walked toward the plate, causing both benches to empty although no punches were thrown.

After the game, Manoah told reporters he was trying to throw Franco an inside fastball but the pitch slipped.

“He told me it was bad timing. I’m just out there competing, man," Manoah said when describing what he heard from the umpiring crew when he was tossed.

The 23-year-old finished his outing allowing five earned runs, four home runs and a walk in 3.1 innings. Saturday was his fifth career big league start after being called up by the Jays in late May.

The Blue Jays went on to win that game 10-7 thanks to a furious ninth-inning comeback, ending their losing streak at five games.