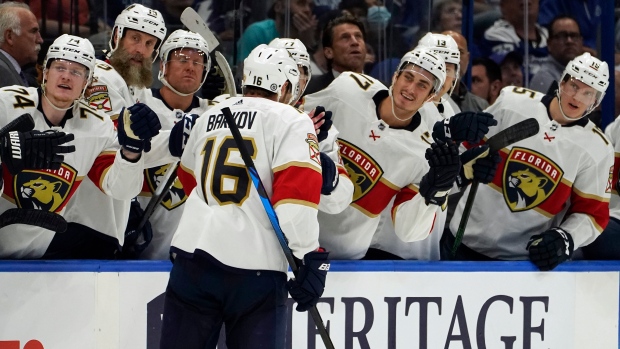 Barkov slammed a loose puck in the crease past Andrei Vasilevskiy for his second of the season. It came 1:04 after the Lightning tied it 1-all on Brayden Point’s goal.

“They tied the game up and when we score right away, it feels like we never lost the lead,” Barkov said.

Florida also got goals from defenseman Brandon Montour, Anton Lundell and Anthony Duclair. Sam Reinhart had two assists and rookie goalie Spencer Knight made 30 saves in his first start this season for the Panthers, who are 3-0-0 for the second straight season.

Prior to 2020-21, the Panthers had not started a season with three straight wins since entering the NHL in 1993.

“I think we played pretty well with the lead,” Barkov said. “I know they got their chances, but our (penalty kill), our defense, our goalie played outstanding. That’s why we won.”

Knight, drafted 13th overall by Florida in 2019, has won all five of his regular-season appearances. He was 1-1 against the Lightning in the first round of last season’s Stanley Cup playoffs.

“He was great. Patient,” Panthers coach Joel Quenneville said. “Challenged at the right time, takes away a lot of the net.”

Vasilevskiy made 28 saves in his fourth consecutive start for the Lightning, who were coming off back-to-back overtime wins after a 6-3 loss to Pittsburgh on opening night.

“We had our chances,” coach Jon Cooper said. “They didn’t go in for us tonight, but we had a lot of good chances. We’ll be all right.”

Montour gave the Panthers a 1-0 lead at 6:12 of the second, beating Vasilevskiy with a wrist shot from near the right faceoff dot for his first of the season. Point tied it 2:36 into the third when his slap shot from the high slot ticked the stick of Panthers defenseman MacKenzie Weegar and zipped past Knight.

Lundell gave Florida a two-goal lead when he beat Vasilevskiy with 6:41 remaining for his first NHL goal in his third game. Duclair scored for the third straight game when he hit the empty net with 2:06 left.

The Lightning played without forward Nikita Kucherov, who sustained a lower-body injury during Tampa Bay’s 2-1 overtime victory against the Washington Capitals on Saturday. Cooper said Tuesday he expects Kucherov to return before the end of the season.

Kucherov missed the 2020-21 regular season following hip surgery but returned to lead the Lightning with 32 points in 23 games to help them repeat as Stanley Cup champions.

His absence was especially notable on the power play, as the Lightning went 0 for 6 and failed to convert on a 5-on-3 advantage that lasted 1:34 in the first period.

“We’re missing one of the best half-wall guys in the league,” Point said. “We have to simplify things and get pucks to the net.”

The Lightning have allowed the first goal in all four of their games. They have yet to score a first-period goal and have not led at any point during regulation.

Knight is the 11th goalie in NHL history to win his first five regular-season decisions. Bob Froese of the 1982-83 Philadelphia Flyers and Martin Jones of the 2013-14 Los Angeles Kings share the record with eight in a row.

Lightning: Have three days off before hosting Colorado on Saturday night.