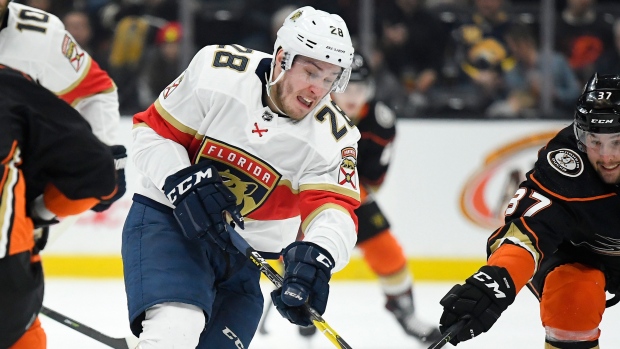 ANAHEIM, Calif. — The Florida Panthers showed a little rebounding prowess, getting a pair of friendly bounces off the end boards to deliver a key 4-1 victory over the Anaheim Ducks on Wednesday night.

Vincent Trocheck and Aleksi Saarela each scored second-period goals off fortuitous rebounds and the Panthers were able to rally from an early deficit. The victory moved Florida past the Toronto Maple Leafs and into third place in the Atlantic Division.

Aleksander Barkov and MacKenzie Weegar also scored for Florida. Sergei Bobrovsky made 35 saves as the Panthers improved to 2-0 on a key five-game West Coast trip.

Florida won consecutive games in California with another set at Los Angeles on Thursday. The Panthers earned a 5-3 victory at San Jose on Monday.

“These are big games for us,” Bobrovsky said. “I thought as a team, we gave a good effort (Wednesday). We got timely goals, guys sacrificing in the (defensive) zone. It was solid and it was fun, too. Winning is fun. You just have to continue working with each other.”

The Panthers look as if they are starting to emerge from a post All-Star break funk. Even with Wednesday’s victory, the Panthers are 4-6-1 since the break after heading into it on a six-game winning streak.

Bobrovsky improved to 22-17-5 and had his seventh game of the season in which he allowed one goal or less. It was his second one since the All-Star break.

“He was excellent,” head coach Joel Quenneville said of his goalie. “He made a key save on a second-period break there. … He was moving. He was on top of the crease, he was finding pucks and they had some traffic there. So he was fighting through it a bit and I thought he did a great job.”

Max Jones scored, and John Gibson had 28 saves for the Ducks, who dropped the opener of a six-game homestand. The Ducks have lost three of their last four games and have dropped three consecutive home games.

“One of our goals was to not feed their transition and I feel we kind of did a bit,” Jones said. “That was something that was critical in the game. There were times in that game we kept going back to retrieve pucks and it’s hard to get offensive zone time when we’re not clicking.”

Jones gave the Ducks the early lead with a goal at 16:04 of the first period. His 10th of the season came unassisted when he raced across the blue line, picked up a loose puck and fired it off the left shoulder of Bobrovsky and inside the right post.

The Ducks appeared as if they would take the lead into the first intermission, but Jonathan Huberdeau fired a perfect pass to Barkov as he rushed to the front of the Ducks goal and he flipped the puck past Gibson with 2.2 seconds on the clock to tie the score 1-1. It was Barkov’s 18th of the season.

“To give up that lead going into the intermission was deflating to say the least,” Ducks head coach Dallas Eakins said. “With that being said, you have to pick yourself up and get going again. I thought we were able to do that. … We can’t make those mistakes.”

The Panthers took a 2-1 lead at 10:50 of the second period when Trocheck cashed in a break. Riley Stillman’s shot past the goal, deflected off the end boards and back over the Ducks’ goal to Trocheck, who picked it out of the air with a waist-high swing for his 10th goal.

The Panthers received another deflection off the end boards less than four minutes later when Aaron Ekblad’s wide shot rebounded around the goal and into the left circle, where Saarela scored from a sharp angle. It was Saarela’s first career goal in his fourth NHL game.

“It felt good,” Saarela said. “I was lucky, got that bounce off the wall and had (what looked like) an empty netter.”

Weegar’s fifth of the season was scored into an empty net with just over two minutes remaining.

Ducks defenceman Cam Fowler, who did participate in morning skate, was a late scratch with a lower body injury. ... Anaheim was kicking off a six-game homestand. ... Barkov now has eight points (four goals) over his past 11 games for the Panthers. ... Mike Hoffman had a goal taken away at 13:10 of the first period for the Panthers when Mark Pysyk was ruled offsides after a successful replay challenge from the Ducks. ... The Panthers improved to 7-1-1 on the road against Western Conference teams.

Panthers: At Los Angeles on Thursday to face the Kings.

Ducks: Home against the Colorado Avalanche on Friday.