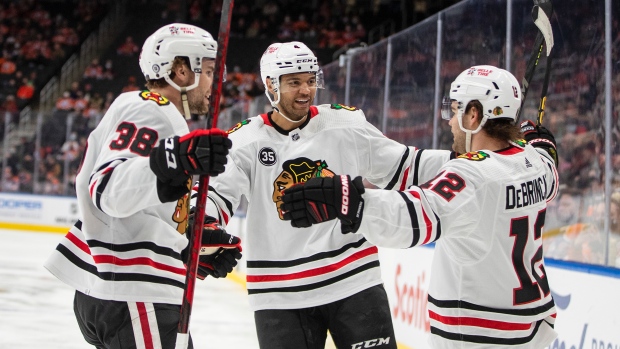 DENVER (AP) — Here's an example of just how much Jamal Murray was missed: Introduced before a preseason home game, the Denver Nuggets all rushed over to swarm him.

That's the level of respect the team has for its point guard, who's back on the court for the first time since tearing his left ACL on April 12, 2021.

The band is back together as Murray rejoins back-to-back MVP Nikola Jokic. Along with Michael Porter Jr., who was limited to nine games last season due to his balky back, they're ready to pick up where they left off when Murray and Porter were healthy. The trio led the Nuggets to the Western Conference finals inside the bubble in 2020.

It may take some time for Denver to round back into that form. The Nuggets' over-under is set at 51 1/2 wins, according to FanDuel Sportsbook, with a plus-2000 to capture the NBA title (the Celtics are at plus-600).

“It’s a different vibe since we got some of our guys back,” said forward Aaron Gordon, whose team opens the season at Utah on Oct. 19. “It’s a certain level of calmness. Just because we do have so many great guys on this team. We have such a talented roster that’s so deep.”

The lineup boasts Murray, Porter, Jokic and Gordon while adding Kentavious Caldwell-Pope to the mix. He was acquired, along with fellow veteran Ish Smith, in an offseason deal that sent Will Barton and Monte Morris to the Washington Wizards. That leaves a bench including Bones Hyland, Jeff Green, Bruce Brown, Zeke Nnaji, Davon Reed, Vlatko Cancar and big man DeAndre Jordan. In addition, the Nuggets drafted Christian Braun out of Kansas with the 21st overall pick.

This roster was assembled in large part because Denver didn’t have Murray and Porter last season. It gave coach Michael Malone and general manager Calvin Booth a chance to evaluate the team through "a different lens,“ Booth said.

“I think when you have guys like Jamal Murray and Michael Porter Jr., it’s easier to overlook some of your flaws,” added Booth, whose team was eliminated in the first round by the NBA champion Golden State Warriors last season. “We came to the realization we needed to get bigger and needed to get more versatile.”

There was a little alarm in a preseason game when Murray tweaked his hamstring, only because he's a big part of the engine that drives the Nuggets. Malone plans to take it nice and steady with Murray's acclimation to the season.

Murray's primary goal is to work his way back into the 21.2-point-and-4.8-assist-a-night form he demonstrated before his injury.

“At the moment, I just want to play,” Murray said. “I don’t care if I go 0-for-10. ... I just want to get those couple games under my belt, first, and then you can have all the talks you want about what you expect.”

Malone’s challenge to his team is to become a top-five defensive squad. The Nuggets were in the middle of the pack in defensive rating a season ago.

“It’s no surprise that Boston and Golden State, the two best defenses, were in the finals,” Malone said.

The Nuggets had a powerful recruiting tool to lure Jordan to town: his good friend, Green.

Porter leaned on Murray and friends in his inner circle while rehabilitating his back injuries.

“I don’t think you really ever lose confidence,” Porter said. “You're always just trying to persevere through stuff. It just takes time.”

He said he doesn’t have any limitations.

“Just continuing to get stronger,” Porter said. “Just getting back out there, being able to get in a rhythm again and keep working every day.”

Gordon hosted a get-together in the offseason to play some hoops and paintball.

The best paintball player on the team?

“I’m a beast at paintball,” Gordon said. “I’m tough when it comes to paintball.”