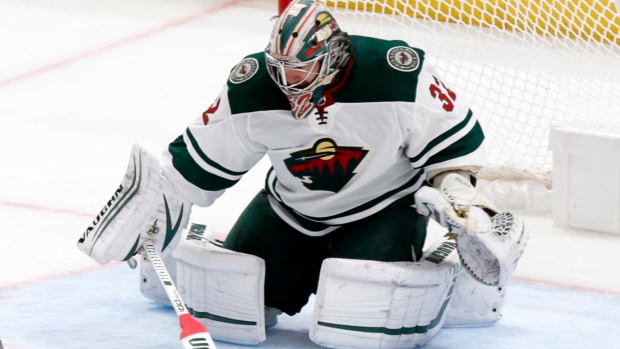 COLUMBUS, Ohio — Alex Stalock stopped 24 shots for his fourth shutout of the season and the Minnesota Wild beat the Columbus Blue Jackets for the second time this week, 5-0 on Friday night.

Zach Parise and Kevin Fiala each had a goal and an assist to help the Wild win their third straight and improve to 12-5-1 in their past 18. They moved within a point of a wild-card slot in the crowded Western Division.

Twenty-four hours after a 7-1 rout of Detroit in the first leg of the back-to-back, the Wild also got goals from Joel Eriksson Ek, Jared Spurgeon and Ryan Hartman. Stalock had his ninth career shutout.

“It’s amazing — it’s momentum," said Stalock, who improved to 18-9-4. "It’s a momentum-type situation, and we’ve been on a roll. We just seem to keep rolling, rolling and going and going.”

The injury-plagued Blue Jackets are slipping in the other direction. They lost for the 10th time in 11 games (1-5-5), but still held on the to the second wild-card spot in the Eastern Division thanks to a Carolina loss.

Joonas Korpisalo looked shaky in his first start in the net since returning from a Dec. 29 knee injury that required surgery. He was replaced by Matiss Kivlenieks after the Wild’s fourth goal with 7:30 left in the second period.

Korpisalo had 11 saves, and Kivlenieks finished with 10.

“We didn’t have the ability to do anything tonight,” Columbus coach John Tortorella said. “Forget offence, defence. That was just a bad game. We haven’t had many of those, but we had one tonight.”

The Wild got two goals in a 34-second span of the first period. First Eriksson Ek beat Korpisalo from the slot with his eighth of the year after taking a drop pass from Jordan Greenway. Then an errant Blue Jackets pass in their offensive zone led to a Wild rush and Spurgeon's goal.

The Wild made it 3-0 with 9:08 left in the second when Hartman tipped in a perfectly placed Mikko Koivu pass from the wing after a sustained effort in the Blue Jackets’ end. Another Columbus turnover in the Minnesota zone led to Parise getting an easy goal from in front of the net. That one chased Korpisalo.

Fiala added a power-play goal from close in with 7:40 left in the game.

“I think the start was really good for us,” Parise said. "You never know on the back-to-backs, but you want to have a good push. We were able to get two early goals and keep playing after that. We didn’t try to win it 2-0. We wanted to get he third, fourth and we did.”

The hard-luck Blue Jackets got a break when they got centre Alexander Wennberg back from an injury Friday night, but there are still 10 regulars sidelined, including All Star defenceman Seth Jones, top goal-scorer Oliver Bjorkstrand, winger Cam Atkinson and, most recently, goalie Elvis Merzlikins. The Blue Jackets lineup is filled out with rookies.

“The older guys need to show the way, show how we need to play,” Columbus defenceman David Savard said. “We’ve got to play physical, simple like a playoff team. We’ve got to treat every game as a playoff if we want to get in.”

NOTES: The Blue Jackets haven't won a game in regulation since Feb. 7. ... Columbus C Riley Nash returned after missing one game due to an undisclosed injury. ... Minnesota promoted D Matt Bartkowski from Iowa (AHL) on Friday, but he was a scratch. ... Fiala has three goals and four assists in the last three games.