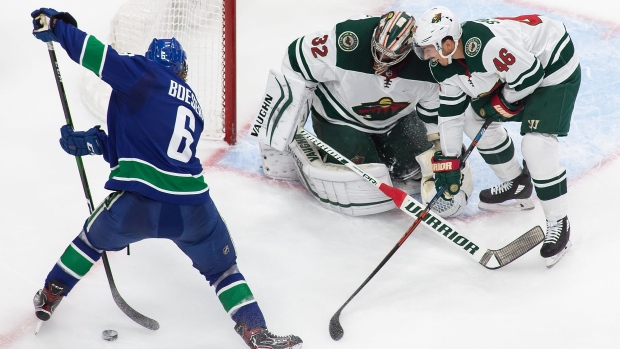 EDMONTON — Jared Spurgeon scored twice for the Minnesota Wild in a 3-0 win over the Vancouver Canucks to start their qualifying series Sunday.

The Wild produced a pair of power-play goals and shut the door on Canucks shooters.

Spurgeon produced one of them, plus an empty-netter, and Kevin Fiala also scored for the Wild.

Minnesota outshot Vancouver 30-27, didn't give up the middle lane to the Canucks and allowed Vancouver few clean entries over the Wild's blue-line.

The Canucks mustered just four shots on goal in the third period and none on a late power play.

Game 2 of the best-of-five series is Tuesday.

In the first playoff start of his nine-year career, Vancouver's Jacob Markstrom's stopped 28 shots in the loss.

Matt Dumba raised his fist on the Wild's bench during both the Canadian and American national anthems Sunday.

The Regina defenceman, who is half-Filipino, explained earlier in the day he intends to do that for the rest of the NHL's restart from the COVID-19 pandemic in homage to former Wild forward J.T. Brown.

Brown did the same during the "Star Spangled Banner" in 2017 as a member of the Tampa Bay Lightning to protest police brutality and racism.

With the NHL's blessing, Dumba made a speech at Rogers Place centre ice stressing the need for social and racial justice prior to Saturday's game between the Edmonton Oilers and Chicago Blackhawks.

The Wild haven't won a playoff series since 2015, which was also the last year the Canucks saw the post-season.

Minnesota led halfway through the second period when Staal fed Spurgeon a cross-ice pass from the boards.

The defenceman from Edmonton whipped a low shot under both the left leg of a diving Alex Edler and Markstrom's left pad.

Three seconds into an Edler tripping penalty, Fiala scored from the high slot at 2:50 of the first period.

Markstrom got a piece of Fiala's snapshot, but not enough as the puck trickled behind him.

Vancouver squandered a chance to go on the power play late in the first period.

Markstrom was summoned to the bench on a pending holding penalty to Parise, but a sixth Canuck prematurely jumped in the ice to negate the man advantage.

Expletives, exhortations to teammates and appeals to officials were clearly audible. One official responded "He knocked you down, you knocked him down."

This report was first published by The Canadian Press on Aug. 2, 2020.