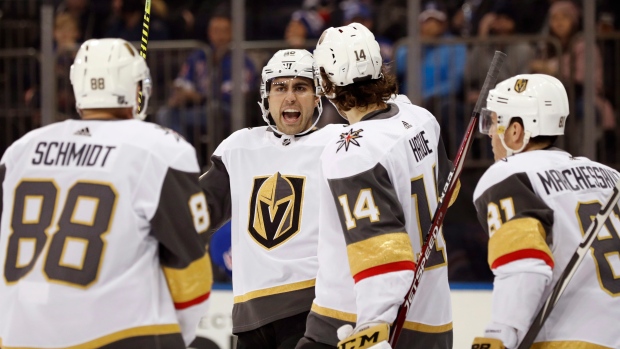 NEW YORK — The Vegas Golden Knights got off to a fast start with two quick goals to start the game, then added two more early in the second period. That was enough to get their first three-game winning streak of the season.

“You could see it really set the tone for our team,” Subban said of the early goals. “And then to follow it up with two more obviously helps. A 4-0 lead definitely gets you feeling good about yourself.”

Though the Golden Knights were feeling good about their longest win streak of the season, Tuch said they don’t think about it too much.

“We’re just going out there trying to play each period one at a time,” he said, “and just trying to get a win every night.”

Brendan Lemieux scored and Henrik Lundqvist finished with 28 saves for the Rangers, who were 4-0-1 in their previous five games.

“I didn’t like our mentality,” New York coach David Quinn said. “We were way too risk-oriented, we just did not play a very solid, structured game. We really fueled their offence.”

The Rangers went 0 for 6 on the power play against a Vegas team that came in tied for fifth in penalty-killing.

New York picked up the pace in the second half of each of the first two periods and came out more aggressive to start the third. The Rangers outshot the Golden Knights 8-1 over the first 12 minutes and finished the period with a 11-4 advantage but couldn’t score.

“We found a way, we made some good saves,” Golden Knights coach Gerard Gallant said. “The guys did a really good job on the PK and that was the difference for us.”

Subban, getting the start while Marc-Andre Fleury is away from the team following his father’s death, denied Ryan Strome’s tip try nearly seven minutes into the third, Filip Chytil’s shot from the left circle with 8 1/2 minutes left and Ryan Lindgren’s attempt from above the left circle less than 20 seconds later.

“We did a pretty good job of taking away their plays on the power play and their strengths,” Subban said. “That obviously goes a long way and really frustrates those guys.”

Vegas scored twice early in the first period and then doubled its lead with a pair of goals early in the second.

Subban knocked turned aside a deflection by Chytil 2:10 into the second to keep the Rangers off the scoreboard, and Chris Kreider hit a goalpost exactly two minutes later.

Smith made it 3-0 on a breakaway as he put a backhander past Lundqvist for his team-leading 12th at 4:44.

With Vegas on its second power play of the game, rookie Cody Glass sent a pass across the front of the goal and Pacioretty quickly put it past Lundqvist for his 10th to make it 4-0 at 6:20.

Lemieux deflected a pass from Jacob Trouba to get the Rangers on the board with 4:45 left in the middle period.

The Golden Knights outshot the Rangers 13-3 over the first 10 minutes.

Tuch got Vegas on the scoreboard just 1:34 in. His shot from the left side was stopped by Lundqvist but it trickled past and, as the goalie lunged back, he appeared to get the puck before it crossed the line. However, after a review, the goal counted as replays showed it went across before Lundqvist pulled it back out.

“It was not the start we were looking for,” Lundqvist said. “After that it was downhill for another five or six minutes before we settled things down and got our game going.”

The Golden Knights went on a power play 18 seconds later and Tuch took advantage on a rush just 2 seconds before the penalty expired, tipping a pass by Nate Schmidt at 3:50 to make it 2-0. It was his fourth of the season, and third in two games.

“He plays hard, he played well and when he shoots pucks like that he’s going to get them to go into the net,” Gallant said.

NOTES: Vegas acquired F Chandler Stephenson from the Washington Capitals for a fifth-round pick in the 2021 draft. ... Lundqvist appeared in his 874th game, moving past Tony Esposito (Chicago) for the second-most with one team in NHL history. Martin Brodeur (1,259 with New Jersey) tops the list. ... The Rangers went 0 for 2 on the penalty-kill after coming in 20 for 21 over their previous five games, including a stellar effort in which they were 8 for 8 while scoring two short-handed goals in a 4-0 win at New Jersey on Saturday. ... The teams play again Sunday in Las Vegas. ... Pacioretty leads Vegas with 26 points. ... The Golden Knights now have 33 goals in the first period, tying Colorado for most in the NHL — though the Avalanche have played three fewer games.

Golden Knights: At New Jersey on Tuesday night in the middle game of a three-game trip to the New York area.

Rangers: At Columbus on Thursday night to start stretch of five of six on road.