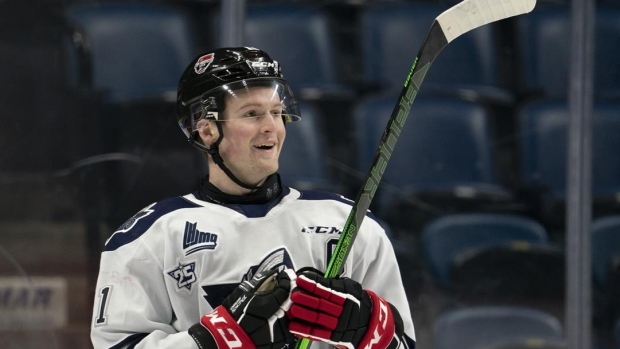 The star winger from the Rimouski Oceanic of the Quebec Major Junior Hockey League registered 35 goals and 112 points in 52 games before the 2019-20 season was cancelled because of COVID-19.

Just the second back-to-back recipient of the Canadian Hockey League's player of the year award, following in the footsteps of fellow Rimouski captain Sidney Crosby in 2004 and 2005, Lafreniere was NHL Central Scouting's top-ranked North American skater and long-viewed as the consensus choice at No. 1.

"It was an unreal feeling," Lafreniere, sporting his new team's hat and jersey, said on a video conference call from the family home in St-Eustache, Que., after having his name called first. "The New York Rangers are a great organization.

The draft, which was originally scheduled for June 26 and 27 in Montreal, is being held remotely via video conference due to the pandemic. Rounds two through seven are scheduled for Wednesday before NHL free agency opens 48 hours later.

"We've been waiting for a long time so it was something really special for me and for my family," Lafreniere added. "We're all really excited."

Lafreniere is the first Canadian to go No. 1 since the Edmonton Oilers selected Connor McDavid in 2015. The Oilers announced late Monday that McDavid had tested positive for COVID-19, is experiencing mild symptoms, and is quarantining at home.

Before the Lafreniere pick, commissioner Gary Bettman announced the league and players are now focused on starting the 2020-21 season on Jan. 1 after previously aiming to get things going Dec. 1. The 2019-20 campaign was suspended in mid-March due to the pandemic and completed late last month inside two tightly-controlled bubbles in Edmonton and Toronto without fans in attendance.

"That's definitely means a lot to me, and that's something special," Byfield said. "Being in the record books for anything is super special, but that especially."

The Ottawa Senators used the No. 3 selection, which they acquired from the San Jose Sharks as part of the Erik Karlsson trade two years ago, to grab shifty German winger Tim Stutzle. University of Ottawa alumni and "Jeopardy!" host Alex Trebek announced the pick in a pre-taped appearance.

"I didn't know like 100 per cent what was going on with (the No. 2 and 3) picks," said Stutzle, who was sporting the Senators' two-dimension centurion logo the team is bringing back next season. "It's just a big honour to play for the capital of Canada."

The top-ranked European skater, Stutzle spent this season with Adler Mannheim in his country's top professional league, where he was named rookie of the year. He's also the third German-trained player to be drafted in the top-6, matching 2020 Hart Trophy winner Leon Draisaitl's selection at No. 3 by Edmonton six years ago.

"I want to win Cups in Ottawa, and I want to play in the NHL as fast as I can," added Stutzle, who also admitted with a smile he doesn't watch Trebek's gameshow.

Last in the overall standings when the season was halted, the Detroit Red Wings dropped from No. 1 to No. 4 in the first phase of the NHL's draft lottery in June, but still got Swedish winger Lucas Raymond with their pick.

Ottawa was back on the clock with its own selection at No. 5 and chose blue-liner Jake Sanderson from the U.S. under-18 program to become the first team since 2000 to make two picks in the top-5.

The son of former NHLer Geoff Sanderson took in the draft with his family from a suite at the University of North Dakota's home arena where he started his first semester this fall.

"I've watched every single draft on TV with my family in our living room since I can remember," he said. "To be here and sitting in this position is pretty crazy and surreal. The Trebek thing was pretty cool and pretty funny. I thought that was really awesome how they did that.

"It's a little bit different draft this year, but I think it's kind of special in its own way."

The Winnipeg Jets had Crystal Hawerchuk, wife of the late Dale Hawerchuk, make their selection at No. 10 of centre Cole Perfetti of the OHL's Saginaw Spirit.

The Oilers took centre Dylan Holloway from the University of Wisconsin at No. 14, Toronto Maple Leafs selected Russian winger Rodion Amirov at No. 15 and the Montreal Canadiens snagged defenceman Kaiden Guhle from the Western Hockey League's Prince Albert Raiders at No. 16.

The Calgary Flames dealt the 19th pick to the Rangers for the 22nd and 72nd selections. Calgary then traded down again to get No. 24 and No. 80 from the Washington Capitals. Calgary finally made its first pick of the night, taking centre Connor Zary from the WHL's Kamloops Blazers with the 24th selection.

The Senators also own the 28th pick, which originally belonged to the New York Islanders, while the Vancouver Canucks don't have a selection until Wednesday's third round.

Unlike their NFL or NBA counterparts, NHL teams are usually seated at tables on the floor of one of the league's 31 arenas — in this case it would have the Bell Centre — for its draft, but the 2020 edition saw general managers and much of their scouting staffs spread across North America.

Instead of walking over to chat with a rival GM about a potential trade, cellphones had to suffice.

The prospects set to take their first steps into the NHL, meanwhile, all watched proceedings remotely, away from the usual bright lights that come with the draft.

First-round hopefuls were each sent gear from the league's 31 teams — Stuetzle's agent tweeted a picture of a table with 31 hats set up in order of selection — so they'd have some swag once their names were called.

The Senators, who have largely made headlines for all the wrong reasons since getting within a double overtime goal of the 2017 Stanley Cup final, hope securing Stuetzle and Sanderson will accelerate a rebuild that saw a roster once led by Karlsson — the team's captain and a two-time Norris Trophy-winning defenceman — torn down to its studs.

Lafreniere didn't get the normal draft thrill of climbing on stage in front of friends, family and adoring fans in Montreal, a short drive from his hometown, but is still the first Quebec-born skater to hear his name called at No. 1 since Vincent Lecavalier in 1998.

The Rangers, who selected winger Kaapo Kakko at No. 2 in 2019, beat the odds for a second straight year, jumping 11 spots for the right to pick Lafreniere by winning the second phase of the draft lottery following the disappointment of being the first team eliminated from the NHL's 24-team restart to the season.

This report by The Canadian Press was first published October 6, 2020.