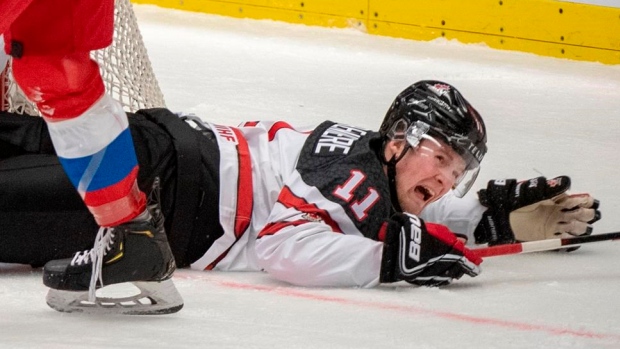 No decision has been made on whether star Team Canada forward Alexis Lafreniere will be able to return to action at some point during the World Junior Championship after suffering a left knee injury against Russia on Saturday, but his agent released a statement to TSN Hockey Insider Bob McKenzie on Monday.

“We are having the MRI results reviewed by doctors both in Minnesota and Montreal to make sure we are making the right decisions. Alexis wants to play more than anything but that decision will be taken based on his long-term future and to not risk anything," said Lafreniere’s agent, Emilie Castonguay. "It is simply too important. If there is any risk to aggravate the injury or expose a weakened knee to any further injury, he will not be taking that risk.”

No decision, pro or con, has been made on Alexis Lafrenière’s WJC status but when asked about it this morning, his agent Emilie Castonguay said the following:

“It is simply too important. If there is any risk to aggravate the injury or expose a weakened knee to any further injury, he will not be taking that risk.”

Following the blowout 6-0 loss to the Russians on Saturday, TSN's Frank Seravalli reported the initial prognosis provided a glimmer of hope that Lafreniere may even be able to return to play in this tournament.

Lafreniere, who's projected to be the first overall pick in June's draft, suffered the injury in the second period when he crashed into the Russian net. The 18-year-old seemed to be in considerable pain and needed help to get off the ice. He was seen limping at Team Canada's hotel after the game, but did not need crutches.

The native of Saint-Eustache, Que., has 23 goals and 47 assists over 32 games with the Rimouski Oceanic of the QMJHL this season. He had a goal and three assists in Canada's win over the United States on Boxing Day.