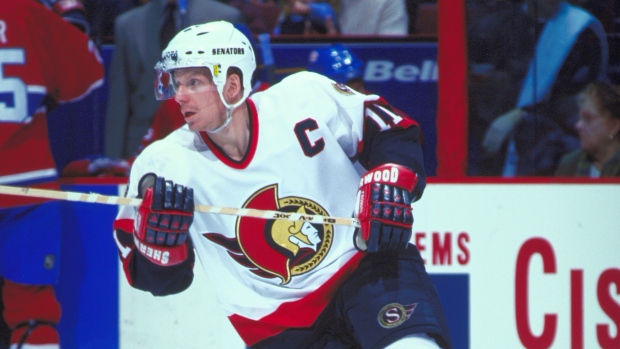 Daniel Alfredsson is finally ready to call it a career after 17 NHL seasons.

The long-time Senators captain is expected to retire Dec. 4 in Ottawa. The Senators host the New York Islanders that night at the Canadian Tire Centre.

Alfredsson, 41, appeared in 1178 career NHL games with the Senators and Detroit Red Wings, scoring 426 goals and 682 assists for 1,108 total points. The Red Wings, for whom he played in 2013-14, were waiting on a decision as to whether Alfredsson would play again this season, but instead he has decided to retire.

The Gothenburg, Sweden native broke into the League in 1995-96 after being selected in the sixth round (133rd overall) by the Senators in the 1994 NHL Entry Draft. That season he racked up 26 goals and 35 assists, earning the Calder Memorial Trophy as the league’s top rookie.

He would appear in three straight All-Star Games for the Senators between 1996 and 1998 and was named team captain in 1999-2000 while incumbent Alexei Yashin missed a year with a contract stand-off. Alfredsson’s captaincy in Ottawa extended all the way to the end of the 2012-13 season.

Alfredsson led the Senators through several post-season wars against the provincial rival Toronto Maple Leafs and would be highlighted by an Eastern Conference Final appearance in 2003 and, later, a Stanley Cup Final appearance in 2007. Alfredsson led the 2007 Stanley Cup Playoffs in scoring, potting 14 goals and 22 points as the team clipped the Pittsburgh Penguins, New Jersey Devils and Buffalo Sabres before losing to the Anaheim Ducks in five games in the Cup Final.

He remains the Senators all-time leader in several statistical categories including games played, goals, assists, points, power play points, playoff goals, assists and points. He was selected to six NHL All-Star Games, captaining his own team at the 2012 event in Ottawa. He was awarded the 2011-12 King Clancy Memorial Trophy for his on- and off-ice leadership as well as humanitarian contributions as well as the 2013 Mark Messier Leadership Award.

Alfredsson represented Sweden at numerous international tournaments, including five Olympic Games. His greatest international achievement was winning the 2006 Olympic gold medal in Torino, Italy. He was also a member of Sweden’s silver medal-winning 2014 Olympic team and won a pair of IIHF World Championship silver and bronze medals ranging from 1995 to 2004. He was also on the Swedish team that placed third at the 1996 World Cup of Hockey.