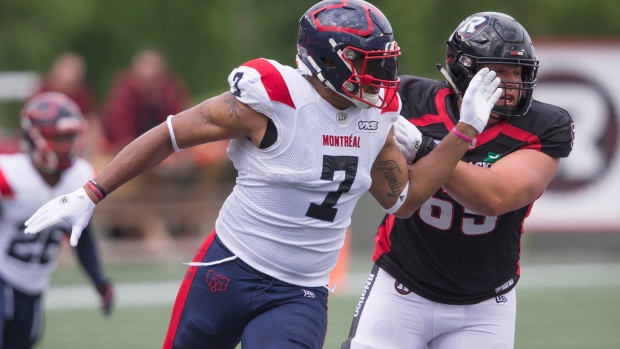 Montreal Alouettes defensive end John Bowman has played 14 seasons in the CFL, and while he’s openly contemplated retirement the past few off-seasons, he hadn’t ruled out returning for a 15th season in Montreal this year. Bowman said he’s been working out, but with the ongoing COVID-19 pandemic pushing back the start of the season, it could affect his plans as well.

“This coronavirus situation may have made a decision for me,” Bowman told TSN’s Matthew Scianitti. “Definitely if we don’t play this year or [we're] held back - I’m just speculating - if there’s no season, I definitely won’t be playing again. But if there’s a little bit of a season to be played, we’ll see. This will be it, this year, however it was going to happen.”

Scianitti reminded Bowman, who told CFL.ca he was “98 per cent done” after the 2018 season before signing a two-year deal with the Als later that off-season, that he’s heard that talk before.

“I know we have,” Bowman laughed. “But it’s just circumstances like, ‘Can I still play?’ That’s my main question. Am I going to be a slug out there or can I still contribute with my teammates? And I’ve proven that I can still contribute at a pretty good level. So that’s been one of the main determining factors keeping me around but I don’t want to linger into too many decades, all-decade teams and stuff like that. People are starting to get tired of seeing my face around Montreal. So I want to bow out, and I will gracefully, hopefully on my own terms, but this thing may have forced its way in.”

Bowman said his head is still in the game - it’s just a question of the physical aspect at this point in his career.

“My mind is strong; I’m not as talented as a lot of guys out there," Bowman said. "I’m not fast, I’m not strong. My mind is what got me through a lot of games. Mentally, I have the fortitude to play again. My physical [aspect] was probably the main reason for me contemplating retirement.”

Bowman was elected vice-president of the CFLPA this off-season, adding responsibilities on league issues. He said it’s been a challenge in trying to provide leadership during the COVID-19 crisis, at a time when there are still so many unknowns for the league and players.

Like everybody else affected by the pandemic across the world, CFL players are operating in the unknown.

“We don’t know when the paycheques are going to roll in, we don’t know if people are eligible for employment insurance," Bowman explained. "It’s a lot of unforeseen things. If the season does start up, how many games are going to be played? What kind of salary cap will there be? There are a lot of questions that we’re still trying to come up with answers to on our side before we get them out to membership.”

Bowman said he wished there was more clarity for CFL players he was elected to represent, but with no timeline to return to play, he has to take a wait and see approach.

“The toughest thing is not having answers," Bowman said. "Guys voted us into these roles to answer the questions that they might have but when there’s a situation that’s always evolving, ever-changing, and the rapid contagiousness of this virus, nobody knows any answers. We don’t know when we’re going to start, we don’t know if we’re going to start, or if we do start, what’s the health risk for the fans, for the players, for the umpires. It’s a lot of things that go into this and we’re asking questions every day.

“The best thing we can do is listen to our government and go by what they say … make sure everybody is safe and healthy. That’s primary and then football comes after.”

The CFL announced earlier this month the start of the season, which was scheduled to begin June 11, has been postponed until at least July.