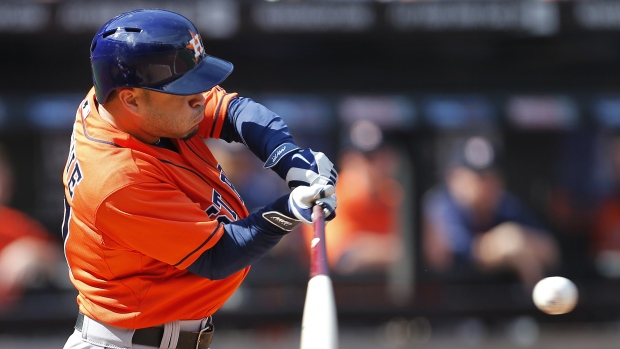 NEW YORK, N.Y. - A base hit in his final at-bat brought tears to Bobby Abreu's eyes.

Abreu bid goodbye to the big leagues with a single that sparked the decisive rally, and the New York Mets beat Houston 8-3 Sunday as Jose Altuve became the first Astros player to win a batting title.

"Special," said Abreu, who was out of the majors last year. "The way that I wanted to end it — on the field."

Lucas Duda homered and drove in four runs, Bartolo Colon reached 15 wins for the eighth time and the Mets finished tied with Atlanta for second in the NL East, their highest spot in the standings since 2008. New York (79-83) won its last two games to improve by five wins over consecutive 74-88 records the previous two years.

Altuve talked his way into the lineup and wrapped up the American League batting crown with two more hits.

Initially benched by the Astros to protect his lead, the pint-sized All-Star reiterated his desire to play and the team complied, revealing he was added to the starting lineup in a Twitter post about 35 minutes before the first pitch.

The mini-saga made for a bizarre morning at Citi Field, but Altuve was hardly affected at the plate. He went 2 for 4 with a ground-rule double and a run-scoring infield single, ending the season with 225 hits and a .341 average — both best in the majors.

In the clubhouse afterward, the Astros toasted Altuve with champagne poured into plastic cups. He posed for pictures with several teammates and autographed bats for them.

Altuve began the day with a three-point lead over Detroit slugger Victor Martinez, who went 0 for 3 and finished at .335.

"I think this is way better than just sitting on the bench and waiting for something," Altuve said. "If you want to win something, you've got to win it on the field."

Houston (70-92) improved by 19 wins over last year, the second-best turnaround in the majors behind the Los Angeles Angels.

After announcing Friday that he planned to retire when the season was over, the 40-year-old Abreu received his first start Sunday since July 25. He got a standing ovation from the crowd of 34,897 following his 2,470th career hit and teared up as he doffed his helmet.

Altuve, a fellow Venezuelan, tossed the souvenir ball to Abreu at first base and sidled over for a warm handshake. A choked-up Abreu hugged pinch-runner Eric Young Jr. and headed to the dugout.

"I feel really good for him. He's one of the best players from Venezuela. He played 18 years in the big leagues and he had a really good career," Altuve said.

Abreu leads all active players with 574 doubles and 1,476 walks.

"Just enjoying the moment," he said after the game, still in uniform.

Duda hit a two-run shot in a four-run eighth to give him 30 home runs and 92 RBIs in a breakout season.

"That's a pretty nice number. Hopefully build on that and take it into next season," he said.

Ruben Tejada added a two-run homer of his own.

The 41-year-old Colon (15-13) gave up three runs and eight hits in six innings, surpassing 200 innings for the season.

Tropeano, who grew up nearby on Long Island, had a large cheering section — he figured it numbered more than 100 — behind the Houston dugout that chanted his name at times during his fourth major league start.

THEN THERE WERE THREE

Seattle/Milwaukee, Arizona and Tampa Bay remain the only teams in the majors without a batting champion.

Astros: Chris Carter sat out in favour of 1B Jon Singleton and finished the season with 37 homers and 88 RBIs.

Mets: OF Kirk Nieuwenhuis was still in the hospital with an infection and was scheduled to have more tests, manager Terry Collins said. ... RHP Daisuke Matsuzaka said he wants to be a starting pitcher next season, but he hasn't thought about whether that might be in the majors or Japan. Collins said he thinks all the roles Matsuzaka was used in this season probably took its toll on his elbow, but he never complained. "I don't think there's any question Dice has still got some innings in him," Collins said.

ALL IN THE FAMILY

It was Casey Stengel bobblehead day at Citi Field, and four generations of the late manager's family were on hand, according to the SNY broadcast. Stengel managed the expansion Mets in 1962, four years before he was inducted into the Hall of Fame. His grand-niece, Toni Mollett Harsh, threw out the ceremonial first pitch.