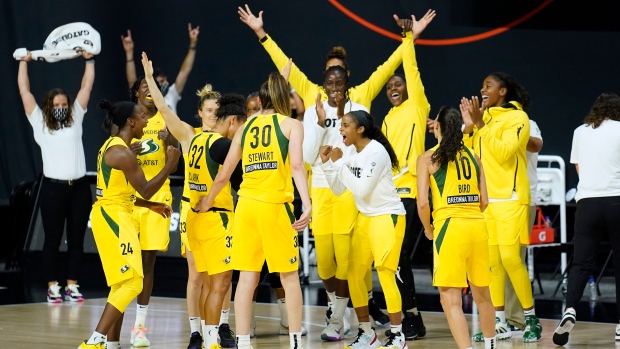 BRADENTON, Fla. — Alysha Clark's putback at the buzzer lifted the Seattle Storm past the Minnesota Lynx 88-86 on Tuesday night in the first game of the semifinal series.

Seattle inbounded it with 14.8 seconds left after Napheesa Collier tied it on an up-and-under move. Sami Whitcomb got it in the corner and drove the baseline for a layup that missed but it fell to Clark, who corralled it and released it just before the final buzzer.

Seattle, which has won seven straight games against Minnesota, hadn't played since Sept. 13 after earning a double-bye to the semifinals. The game was originally scheduled for Sunday, but it was postponed because of inconclusive COVID-19 tests with three players on the Storm. Seattle stars Breanna Stewart and Sue Bird had been off since Sept. 9 due to injuries.

Jewell Loyd scored 18 of her 25 points in the first half, and Stewart had 21 points and 10 rebounds for Seattle. Bird had 11 points, including two fourth-quarter 3-pointers, and eight assists.

Collier had 25 points, nine rebounds and six blocks for Minnesota. Odyssey Sims added 19 points and rookie of the year Crystal Dangerfield was held to four points.

Loyd blocked Sims' layup attempt and Clark made a layup at the other end to give Seattle an 84-81 lead. After Damiris Dantas tied it with a corner 3-pointer, Loyd put Seattle back in front with a driving layup.