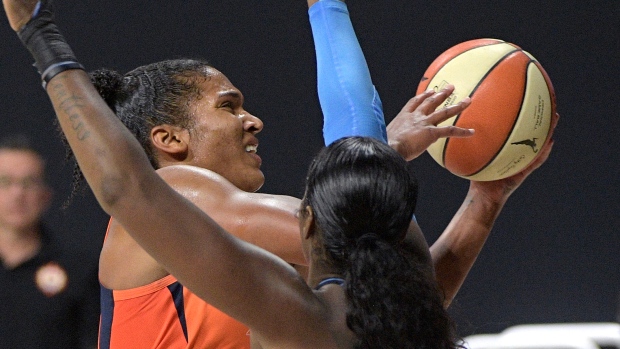 Alyssa Thomas had 26 points, 13 rebounds and eight assists, DeWanna Bonner added 23 points and 12 boards, and the seventh-seeded Connecticut Sun beat the No. 6 seed Chicago Sky 94-81 on Tuesday night in the opening game of the playoffs.

Connecticut will play either third-seeded Los Angeles or No. 4 seed Minnesota on Thursday in another single-elimination round.

Thomas beat the halftime buzzer with a hook shot in the lane to tie it at 41, and Connecticut started the second half on a 13-2 run with six points from Jasmine Thomas. Chicago was outscored 27-11 in the game-changing quarter.

Brionna Jones added 12 points and eight rebounds for Connecticut, which overcome a franchise-worst 0-5 start to the season. The Sun had a 40-21 advantage on the glass.
Connecticut Sun forward DeWanna Bonner (24) drives to the basket in front of Chicago Sky guard Kahleah Copper during the second half of Tuesday's playoff game.

It was a memorable season for Vandersloot, who became the first player in WNBA history to average 10 assists per game after totaling 220 in the shortened 22-game regular season.