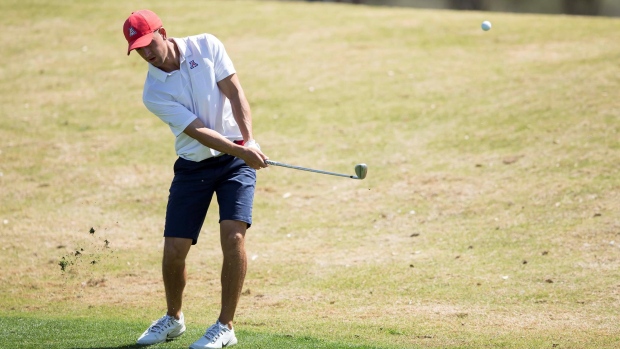 SAN JACINTO, California—It took amateur Briggs Duce a while to make his first birdie during Wednesday’s second round of the Mackenzie Tour Qualifying Tournament at Soboba Springs Golf Club. He even made a bogey before he made a birdie. Once the birdies started, though, they came in bunches. Duce made five birdies in a row to finish his front nine, and he used that run to shoot his second consecutive 3-under 69 to take a one-shot lead over Norman Xiong at the tournament’s halfway point. Ben Lein and Joseph Harrison are tied for third, two strokes behind.

Duce had just posted what he called a “rough-looking bogey,” his tee shot on No. 4 landing on the firm green, the ball bouncing into the rough, where he could not get up and down. That was merely a signal of good things to come for Duce. His first birdie of the day came on the next hole, the first of back-to-back par-5s at Soboba Springs. He missed the green in two, chipped on and drained the putt, and the streak was on. He was on the green in two on No. 6 and routinely two-putted, rolling in a 10-footer on No. 7. He knocked his tee shot to the middle of the green on the par-3 eighth and made a 24-footer there and then finished his front nine with a 13-foot birdie putt to shoot a 32.

“I was just trying to give myself looks, and I was rolling the ball well and they ended up going in,” Duce said.

The birdie binge ended at No. 10. What looked like a straightforward nine-foot birdie putt wasn’t. “There’s actually a decent amount of slope around that hole, and from the angle I was putting on, it kind of runs away. I wanted to make sure I hit a good putt and focus on speed,” he said. “When you try to force birdies, the next thing you know you have a four-footer coming back with a lot of break. I was trying to put a good roll on it, and I pushed it a bit. I wasn’t too disappointed.”

As it did in Tuesday’s first round, the wind picked up considerably in the afternoon, and that led to a few adventures for Duce, as he made three bogeys and two birdies coming in. One of the birdies came at the 18th, allowing him to walk off the course with good thoughts.

Looking at scores, Xiong hit the most good shots, his 5-under 67 the best round of the week. His score catapulted him into second place. Xiong’s front-nine scorecard was a sight to behold, however.

Xiong, the former University of Oregon consensus All-American, had no pars on his opening nine. Instead it was a steady diet of birdies—on Nos. 1, 2,3, 6 and 8—and bogeys—on Nos. 4, 5, 7 and 9. The feast-or-famine early showing didn’t hurt Xiong, as he finally made some pars (five of them), and four more birdies for the 67.

“I feel pretty good, pretty solid. I’m just looking forward to the next few days to do what I did the last two,” he explained. “It felt solid. I enjoy playing on this course. The greens are a little tricky, so I’m just trying to be as free as I can out there.”

Nick Cantlay, the first-round leader, began on No. 10 and made the turn at 1-under for the day and 5-under overall. He moved to 6-under with a birdie at the par-4 third hole then stumbled coming in, with bogeys on four of his final six holes. He parred the other two finishing holes to post a 2-over 74. At 2-under, he’s tied for 11th with 36 holes to play.

The leaders—Duce, Xiong and Lein—will tee off at 1 p.m. PDT Thursday on the front nine.

Did you know in 2018, Norman Xiong won four of his final six college tournaments? He won individual honors at the Oregon Duck Invitational by a stroke, he was the medalist at The Goodwin in San Francisco, he shared top honors with Collin Morikawa and George Cunningham at the Annual Western Intercollegiate in Santa Cruz, California, and he edged Brandon Wu to win the NCAA Pacific Regional in Stockton, California.