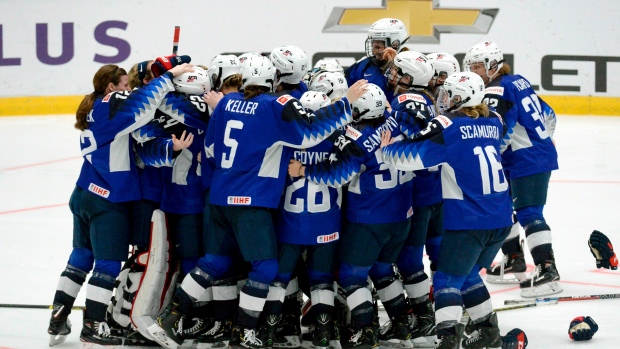 The Americans led the shootout 2-1 when Alex Rigsby stopped Susanna Tapani for the win.

Playing in their first final, the Finns were devastated because they thought they'd won their first gold on a Petra Nieminen goal at 11:33 of overtime.

The team and the sold-out Metro Areena convulsed in joy, but the goal was waived off after a lengthy review.

Finnish captain Jenni Hiirikoski had made contact with Rigsby as she passed in front of the net, which gave Nieminen a near-empty net at which to shoot.

Finland had a pair of power-play chances and the U.S. had one in overtime, but neither side could produce the equalizer.

Annie Pankowski scored in regulation for the Americans, who have won eight of the last nine gold medals at the championship.

Alex Rigsby made 27 saves for the win.

Sunday's championship game was the 19th in tournament history, but the first that didn't feature the United States and Canada battling for gold.

Finland upset Canada 4-2 in one semifinal, while the United States blanked Russia 8-0 in the other Saturday.

The Americans were outshooting the Finns 23-10 in the second period when Pankowski beat Raty's glove with a low wrist shot at 15:46.

Finland countered quickly, however, with Tapani wristing the puck over Rigsby's shoulder at 18:29.

The 2020 championship will be held in Halifax and Truro, N.S.