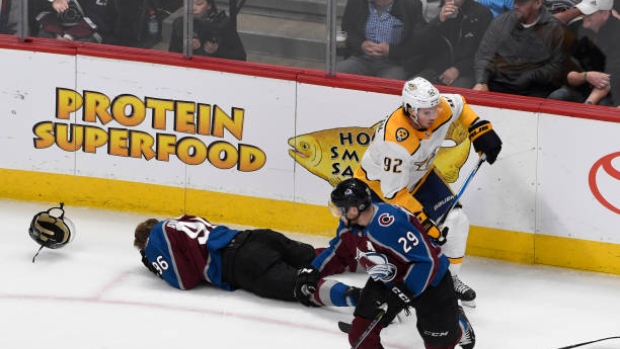 Rantanen lays on ice after hit by Johansen , Getty Images

Drew Doughty watched other playoff games this season and couldn't believe that George Parros, the NHL's discipline czar, had suspended him for a head shot.

Doughty's one-game suspension was the first of several in the first round for a hit to the head of an opponent. Toronto's Nazem Kadri got three games and Winnipeg's Josh Morrissey and Nashville's Ryan Hartman got one game each. Washington's Tom Wilson and Tampa Bay's Nikita Kucherov were among those who got off without significant punishment.

The criticism, from Columbus to Colorado and from New Jersey to Los Angeles, was loud enough that the NHL's department of player safety put out a video last week explaining its reasoning for suspending Doughty and Hartman but not Kucherov or Predators centre Ryan Johansen.

"The illegal check to the head rule is often misunderstood or misstated," the league said in the video. "Illegal checks to the head and legal full body hits often look similar at first glance because the difference between legal and illegal can be a matter of inches in a sport that moves fast."

Discontent over the goalie interference rule has been grabbing headlines for weeks, but the head shot discussion carries far more serious implications for a league still grappling with how best to protect its players. What's acceptable has evolved from the early days of hockey through Scott Stevens' then-legal crushing blow on Eric Lindros in 2000 to today, where checks to the head are parsed frame-by-frame to determine if a line was crossed. The NHL, too, is still facing a federal class-action concussion lawsuit filed by former players alleging it failed to warn them about the health risks associated with head injuries.

Meeting with Associated Press Sports Editors last week, NHL Commissioner Gary Bettman insisted there was nothing new about the subject. Asked about player safety, Bettman said Parros is off to good start in the former enforcer's first season as vice-president of player safety. He said he is proud of player safety's transparency in the form of videos detailing the reasons for suspending a player.

"Sometimes we get accused of splitting hairs, but that's exactly what they have to do," Bettman said. "I think he's reached the appropriate conclusion when it's been a hockey play that doesn't transcend the rules and I think he's been appropriately punitive in cases where it warranted it. There's never going to be a shortage of critics of what they do."

Doughty, a finalist for the Norris Trophy as the league's top defenceman, said he hit Vegas forward William Carrier's shoulder first before his head in Game 1. Kings coach John Stevens added: "As long as I'm on the earth, I'm going to agree to disagree with that decision."

Los Angeles general manager Rob Blake, who worked under Brendan Shanahan in the department of player safety from 2010-2013, said it's a tough job while at the same time reiterating the organization was unhappy with the suspension of Doughty. Columbus GM Jarmo Kekalainen was upset forward Josh Anderson was ejected from Game 1 against Washington for boarding Michal Kempny and called a hit to the head of Alexander Wennberg from Washington's Tom Wilson that got only a minor penalty "dangerous."

Wilson was not given a hearing or suspended. Wennberg missed Games 2, 3 and 4 and the hit was not included in the NHL's explanation video.

Columbus coach John Tortorella didn't want to weigh in on the lack of punishment for Wilson, a common refrain across the NHL because nothing can be done after the fact. For a more specific reason, Bettman doesn't weigh in on suspensions because any appeals go to him. He does look at suspension videos before they are issued.

"I think player safety as a whole has done an extraordinarily good job of changing the culture," Bettman said." We have players not making certain types of hits anymore. We have players who are more accountable for their conduct and understand it and I believe that they've been consistent."