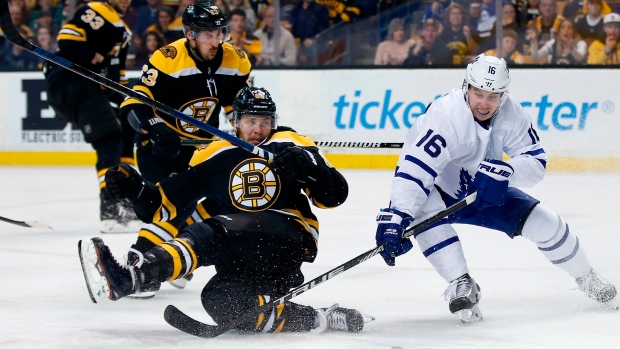 Right around this time every year I write about the National Hockey League’s division-based playoff format. It’s my annual tradition to complain about something the league clearly isn’t interested in changing anytime soon, despite compelling evidence that it’s unfair for a multitude of reasons.

I won’t comprehensively restate arguments here, but the current playoff format fails on a few fronts. Due to it being division-based, the spirit of fairness requires talent balance across all four divisions. As soon as one division becomes ‘more talented’ than another, imbalance occurs.

Stronger divisions not only require a higher points threshold for a guaranteed playoff berth, but they also force teams to incur a much more challenging road to a championship than they would in virtually every other major North American sport. Conversely, teams in weaker divisions will have relatively easier paths to the same Stanley Cup goal, despite earning less during the regular season.

(This same issue existed on a lesser scale with conference imbalance prior to realignment, but creating four buckets versus the historical two has mathematically compounded the imbalance issue.)

We already know that the selection of our 16-team playoff pool is suboptimal. We accept that by way of this playoff format. But that’s not enough! We then ask that teams win their respective divisions, which again, creates relatively unfair paths to the same end goal. This is always most noticeable during the first round, particularly with the two-seed versus three-seed matchups.

I tend to listen to the same counterarguments each year about the playoff format, few of which make sense to me. One that I’ve long heard is that the regular-season schedule actually creates divisional imbalance, so the points accumulated aren’t real reflections of team talent. A way to think about this is if you have a top-heavy division, the playoff bound clubs just mercilessly beat up on the lottery-bound clubs.

So let’s assess that argument. First let’s look at the point distribution for all 31 teams and see which divisions are more top- heavy than others. 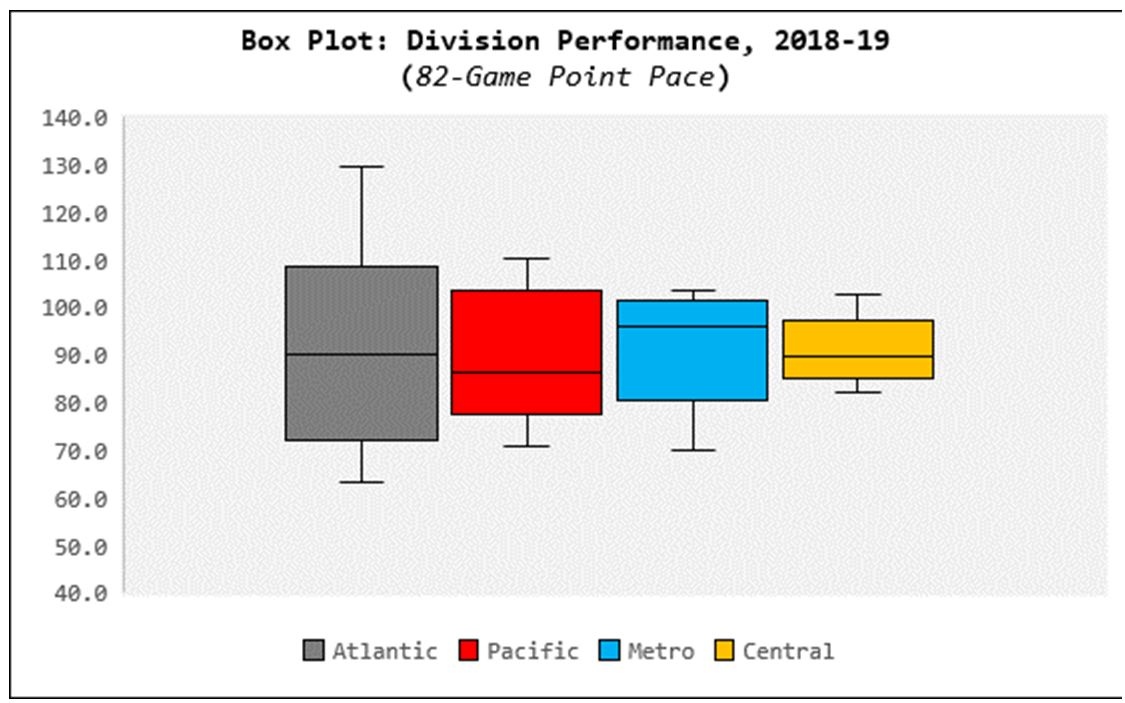 It’s not surprising to see the Atlantic Division with the biggest spread in observable performance, and the Central with the smallest spread. The Atlantic has three of the top six teams in the league and two teams with legitimate lottery hopes. The Central Division has no prohibitive divisional favourite, but also has no team that has struggled even close to the degree that teams like Detroit and Ottawa have this year.

The argument goes that Tampa Bay, Boston, Toronto, and, to a lesser extent Montreal, feasted on bad teams like Buffalo, Detroit, and Ottawa – not that Buffalo, Detroit, and Ottawa have been pushed down in the standings by the other four teams. That’s why it seems as if the Atlantic and Pacific have higher talent ceilings than, say, the Metro and the Central. That seems to me a bit of a specious argument.

If we look at our playoff contenders – imagine the “power four” of each division based on Sunday’s end-of-day standings – you can see that these teams didn’t just feast on the weaker intradivisional teams: 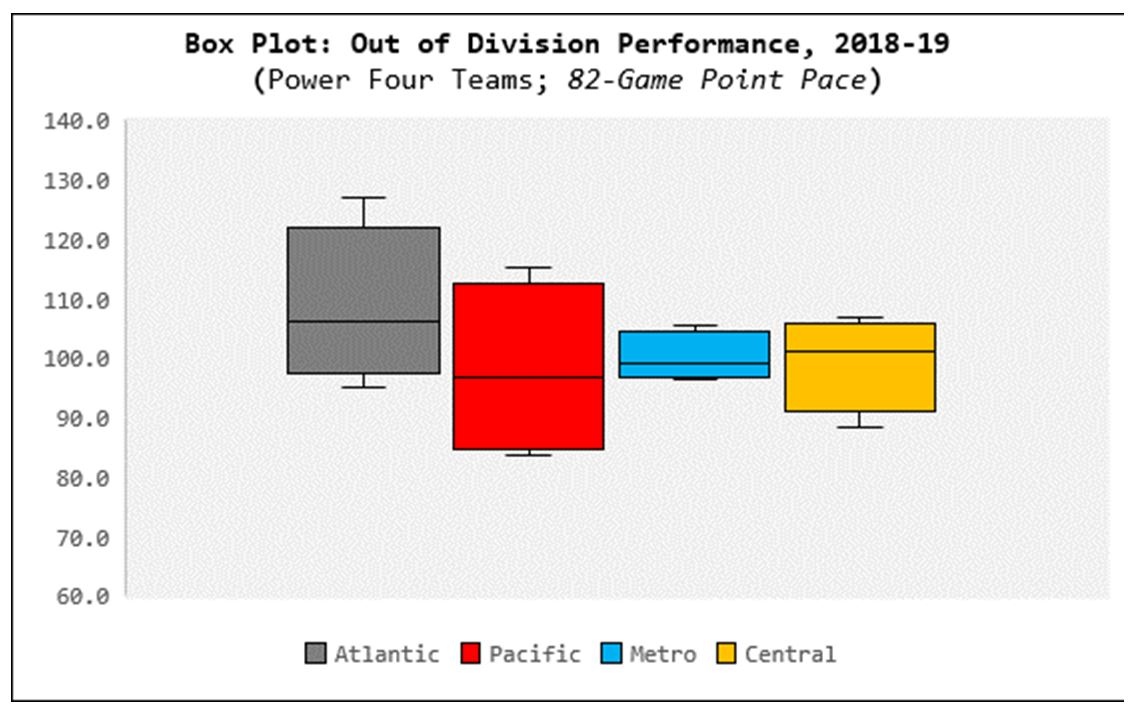 The Atlantic, clearly, is housing the best power four of the respective divisions. The Pacific has an incredibly wide distribution, largely because Calgary and San Jose have been incredible out of division, whereas Vegas and Arizona haven’t. On the other hand, the Metro is tightly clustered – top-ranked Carolina (105 points per 82 games) sits just nine points better than Washington (96 points per 82 games) when it comes to out-of-division performance.

Maybe you aren’t fully convinced. Maybe you are prepared to argue that conference-scheduling imbalance (the Atlantic plays the Metro more than, say, the Central) contributes to some of this. Or that point percentage isn’t the best reflection of true performance, and that we should look at something like shot and goal differentials with respect to divisional head-to-head.

That, of course, tells the same story within our playoff clubs. Again, the Atlantic and Pacific – in that order, too – look like the better of the two divisions this year. 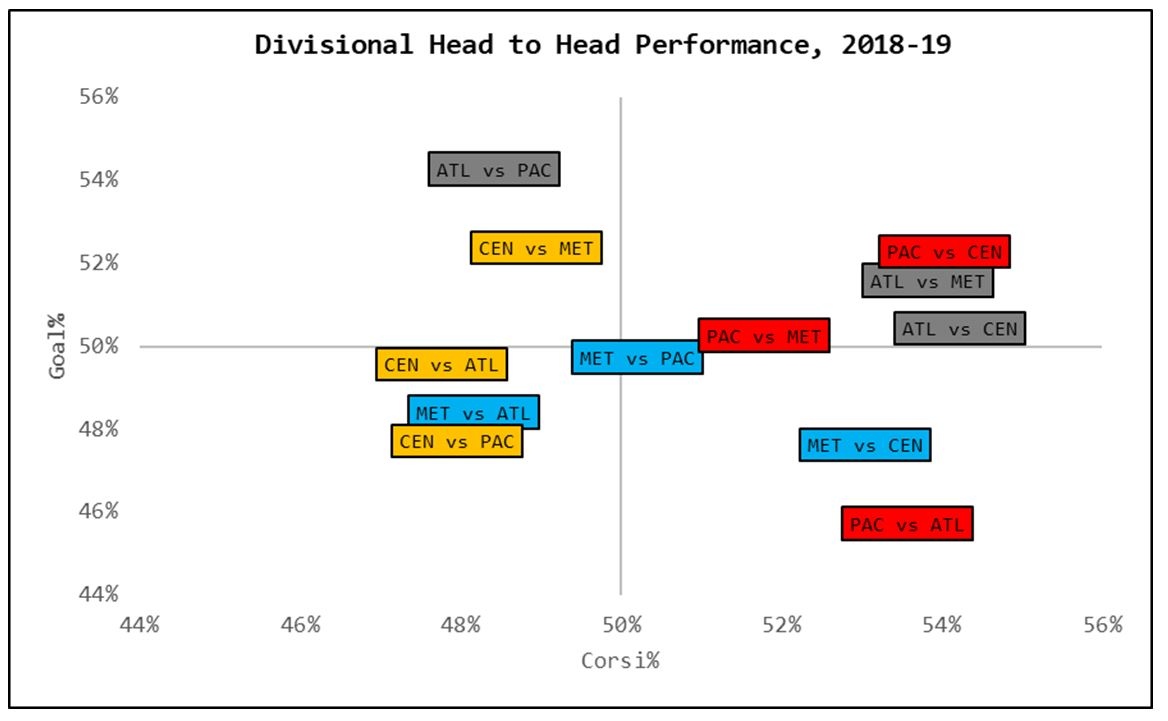 For years, the Central Division was victimized by imbalance. And then it was the Metro. This year, it looks like the Atlantic (and to a lesser extent, the Pacific) will be penalized in a similar manner.

Knowing how important the NHL’s 82-game regular season is and knowing that this talent imbalance exists every single year, shouldn’t the league reconsider a format that arbitrarily punishes the natural ebb and flow of team talent across the league?

The goal of the postseason should be to create maximum entertainment and to offer the league’s best teams a shot at the title.

The NHL has accomplished the first. The second? I remain a skeptic.