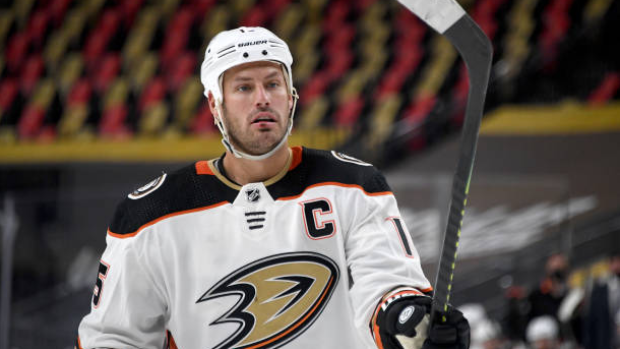 It appears the struggling Anaheim Ducks do not plan to put pending unrestricted free agent Ryan Getzlaf on the trade block this spring.

TSN Senior Hockey Reporter Frank Seravalli said Thursday on Insider Trading that the Ducks don't intend to approach Getzlaf about waiving his no-move clause and will only look to trade him if he asks to be dealt. The report come after TSN Hockey Insider Pierre LeBrun said the Buffalo Sabres are not currently planning to shop Taylor Hall as they look to sign the winger to an extension.

"Yeah, and James I hate to add to some of the concern here, but if we were to do our first Trade Bait board of the season, I'm not sure that Ryan Getzlaf would be on it," Seravalli said. "Another big name from the Anaheim Ducks, who teams would have a lot of interest in now. Here's where things stand with the Ducks and Getzlaf. He means so much to their franchise and they believe he's done a really good job meshing with their younger players. Given all that, their plan at this point is not to approach him about any potential trade. He would have to raise his hand, with that full no-movement clause he has, and say I'd like to go somewhere and chase another Cup at this deadline. So, until he does that and raises his hand, well, I don't think he's ready for the Trade Bait board just yet."

Getzlaf has one goal and six points in 15 games this season with the Ducks, who sit sixth in the West Division at 6-8-3. He had 11 goals and 42 points in 69 games last season.