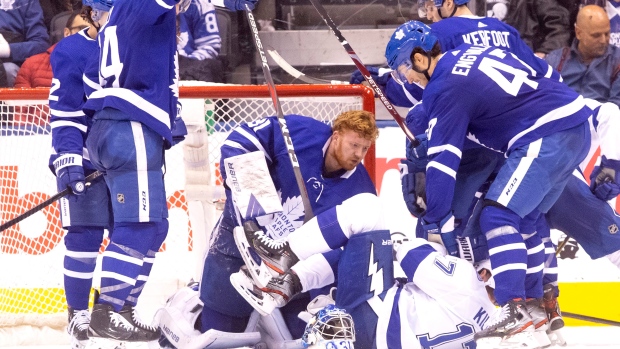 TSN Toronto reporter Mark Masters checks in daily with news and notes on the Maple Leafs. The Leafs practised at Ford Performance Centre on Wednesday ahead of Thursday’s game against the Nashville Predators.

Midway through the third period on Tuesday night, Tampa Bay's Alex Killorn crashed the crease, falling on Leafs goaltender Frederik Andersen, who had just corralled a loose puck. The six-foot-one, 197-pound Lightning forward didn't appear to be all that interested in the puck. With the Leafs protecting a 2-1 lead, no Toronto player did anything to remove Killorn.

The team watched video of the play before practice today and discussed what happened. Sheldon Keefe was asked if he wanted to see someone come to the goalie's defence.

"Yes and no," the coach said. "You want someone to acknowledge it and speak up that it's not acceptable but, at the same time, I really believe strongly that you can't overreact to situations like that."

"It's all situational," Andersen said. "I didn't really see it happening. I was trying to battle for the puck, like, no real damage was happening so I think it would've been undisciplined to go after him and maybe take a two-minute penalty for something that didn't really matter. That could hurt us even more."

Keefe says his experience as a player has him informed how he views the matter.

"I just don't buy into the fact that you make a big scene and you overreact and someone's going to say, 'Oh, OK, I won't do that anymore.' That's just not reality. I think that the players know what they're doing, they're pretty methodical about it, you have to trust the referees are going to protect the players on the ice and it's our job to win the games on the power play and take advantage there."

But while Blake Coleman was called for goalie interference earlier in the game, Killorn's jump went unpenalized.

"If they're taking liberties and you know they're bothering Freddie, you're going to want to step in," said defenceman Travis Dermott, "but it’s all situational. It’s just being smart about it."

"We want to be standing up for each other," said Keefe, "we're a family and all that kind of stuff, but it’s very important, especially this time of year, that we remain composed."

Andersen spoke to the referee after the play and didn't seem sold on the explanation – "He said the puck was loose" – but the Dane didn't show any outward frustration. He didn't allow it to shake his focus or unsettle the team.

"It fired me up a little bit and I tried to play with an edge," the 30-year-old said.

Andersen ended the night strong stopping 32 of 33 shots overall as Toronto edged the highest-scoring team in the league. And while no one got in Killorn's face, Andersen believes there was emotion in the team's game ​and he says that has to continue.

"There has to be emotion and some sort of feeling where you want to leave everything out there and ... last game was great, we came out with fire right away and took the game to them."

It wasn't long ago, after a blowout loss in Pittsburgh on Feb. 18, that Andersen admitted his focus wasn't where it needed to be. He vowed to be better and has responded with a 5-1-1 run posting a .931 save percentage in that stretch.

"At the end of the day, as a goalie, I'm not going to be the loudest guy in the room," Andersen said. "I'm playing a different sport than all the guys, technically, so the way I lead is just by playing my heart out and trying to play as well as possible and really let nothing faze me when times are a little bit tough."

Andersen will make his 53rd start of the season tomorrow against Nashville. He was given a break last week in California and only played once in a nine-day stretch before Tuesday. Toronto only has one back-to-back set left and Keefe said there's no specific plan to get the No. 1 goalie more rest although the team is cognizant of the need to keep Andersen fresh.

"There is an ongoing discussion, really, each day about where Fred's at and what's the right decision for us to make that particular day," Keefe said.

The Leafs are 1-5 in the shootout this season after dropping another one in Los Angeles last week. Only Boston and Columbus have a worse record his season. Toronto's only win in the skills competition came way back in November during an 11-round marathon in Philadelphia. With points so valuable right now, Keefe made the rare move to schedule a shootout drill at the end of today's 20-minute practice.

"To be honest, it's not an area I've spent a whole lot of time thinking about," Keefe said. "But, of course, recognizing we're at a point in time in the season where it could be a major factor (so) you're focusing in more this time of the year on those small details that maybe get lost throughout the season. I do believe there are elements of randomness that go on in a shootout that are uncontrollable and you can't prepare and practice for, but we tried to have more of a game-like setting to it today."

"That move's a cheat code," Andersen said with a chuckle. "He's got the long reach and it's like a glitch. He did a great job. He's gotten me with that one before as well. Maybe we'll see him in the shootout moving forward."

Probably not. For one thing, Marincin was a healthy scratch last night and will likely be in the press box again Thursday assuming the line rushes at practice hold true.

When Toronto gets into a shootout they will likely rely on the usual suspects even though they have largely misfired. William Nylander and Jason Spezza have scored twice on four attempts to lead the way this season while Auston Matthews has one goal on six attempts. Mitch Marner has missed on all five of his. In Los Angeles, Matthews and Marner both failed to even get a shot off on Jonathan Quick.

What's the comfort level for Matthews in a shootout?

"I prefer overtime," he said. "Obviously, L.A., that one kind of got away from me, but I'm pretty comfortable."

Andreas Johnsson, who is out for the season after undergoing knee surgery, is the only Leaf other than Spezza, Nylander and Matthews to score in the shootout this season.

Denis Malgin and John Tavares joined Marincin as the only players to score in today's five round practice competition.

The return of Morgan Rielly was a huge boost for Toronto's defence last night, but another key development for the Leafs has been the play of Dermott, who seemed to be stalled in his development after returning from shoulder surgery earlier this season. The 23-year-old has been elevated into a shutdown role opposite his good friend Justin Holl and has responded with his best stretch of the year.

Dermott played just over 25 minutes against the Lightning, a career-high for a game that ended in regulation. He played 25:21 in Los Angeles last week.

Against the Lightning, Dermott spent almost 11 minutes on the ice with reigning Hart Trophy winner Nikita Kucherov. Per the NaturalStatTrick website, Tampa Bay only outshot Toronto 7-6 in those five-on-five minutes and Kucherov failed to hit the scoresheet. Dermott's reward was to be put on the ice in the final moments to preserve a crucial win.

"You try to keep your mind clear of all the nerves and stresses that can be out there," Dermott said of his mindset. "Just rely on everything we've been taught and keep that in the back of your mind and stay close to Freddie, help him as much as we can and then take away pass lanes, try and block as many shots as you can so it’s pretty simple when you break it down like that, but it can be nerve-wracking at times."

It means a lot, Dermott says, that Keefe and assistant coach Dave Hakstol, who runs the defence on the bench, have faith in him.

"It’s huge," he said. "It really gives you that push and that confidence ... you really start believing you can do it pretty quick."

"He's earned that through the fact that he's improved his play," Keefe said. "He's stepped up and done a really good job."