Button: Leafs dial into the details after taking control of game over Preds

TSN Toronto reporter Mark Masters checks in daily with news and notes on the Maple Leafs, who practised at StarCenter Farmers Branch in Dallas on Tuesday ahead of Wednesday’s game against the Stars.

Sheldon Keefe pulled Frederik Andersen aside for a meeting before the struggling goalie left for his bye week. Andersen had just allowed six goals on 34 shots in a loss to the Chicago Blackhawks. It was the 10th time in 12 games Andersen had allowed three or more goals.

"Wanted to talk to him about a few things and give him a chance to think about a few things and just kind of reset himself," the Leafs head coach said. "All indications are since he's come back that that has happened and he's in a good place. I thought he was excellent yesterday. I thought he was really good and competitive again in our practice today and we'​ll keep him rolling here."

Andersen stopped 34 of 36 shots in Toronto's 5-2 win over the Predators Monday night in Nashville. Only nine days earlier, the Dane staggered into the break. A break he badly needed.

"It was good to get away for a little bit," Andersen acknowledged. "Sometimes the season gets long and the little break was good to remember some good parts, what we do well."

"Probably the birdie on 12," Andersen said of the par-three hole known as Golden Bell. "I think the group that won, we'll probably be pretty obnoxious to watch The Masters with. Definitely some fond memories."

Is there any connection between golf and playing net in the NHL?

"Just trying to have a short memory," Andersen said. "I think that's the biggest similarity that you can take from golfing." 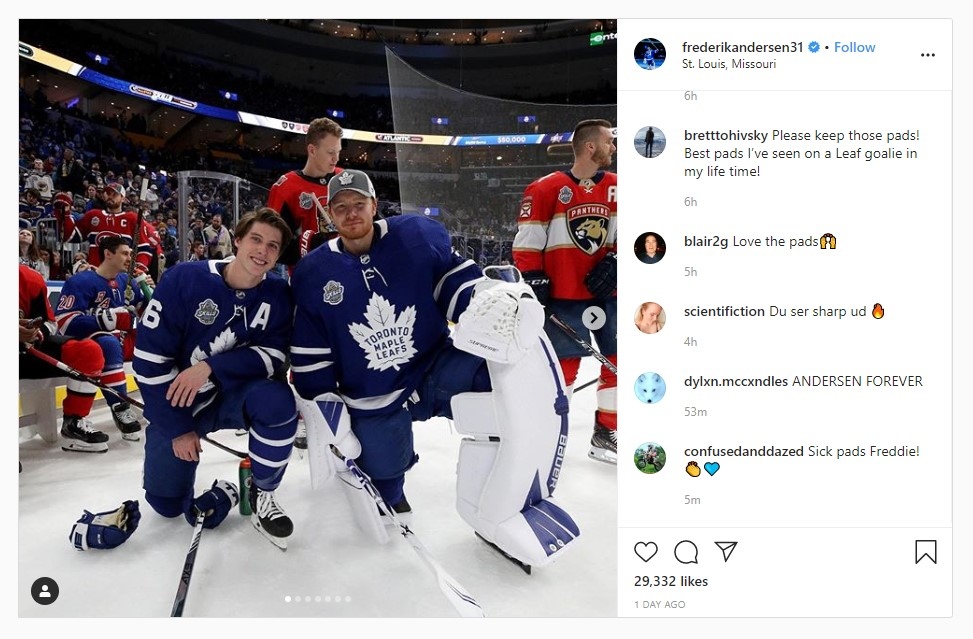 From Augusta, Andersen travelled to St. Louis for his first NHL all-star experience. The recent dip in play meant the 30-year-old arrived at the mid-season festival with a save percentage (.909) well below his career average (.917). But the moment was still confirmation of his standing in the game, a moment he shared with his dad, Ernst, who made the trip to Missouri.

"To be among the best is always going to give you some confidence," he said. "I think especially in the second game I started to feel more comfortable and just enjoying being out there against some of the best guys in the league and really just enjoying the experience."

Andersen said the best part of the weekend was simply hanging out with some of the league's elite talent between events.

"It shows respect," said Predators goalie Pekka Rinne, who has played in multiple all-star games. "It makes you feel wanted and things like that. For sure, it’s a confidence booster."

Andersen's teammates certainly sense that the goalie's aura has returned since he returned from the all-star game.

"The energy you get from being around the best and knowing that you're in that same category can go a long way," said veteran Jason Spezza. "For him to go there I think can really springboard his second half."

After a rough stretch, Andersen appears to be back in the fairway as the Leafs make the turn.

Said Keefe, "The combination of the rest and a little bit of the change of scenery and then also just being in the spotlight, as he deserves to be, and with that group of players, that can help."

How unsteady Freddie morphed back into All-Star Andersen for Leafs

Struggling before the bye-week and All-Star break, Frederik Andersen returned to the Leafs' crease on Monday, securing a win in Nashville. Despite an eventful break, Andersen says the time away was a good mental recharge.

It was Nylander who organized the dream golf getaway to Georgia.

"A guy that I know threw it out there that we could maybe go play some time," the Swede explained. "I didn't realize how special it was to go play there at the time and when I started talking to the boys I found out how special it was so we got on that real quick."

Nylander enjoyed playing the famous course so much he extended his stay an extra day – two to three – and it paid off, because he was able to produce three birdies in his last round.

"It was a surreal experience," Nylander said. "I was hitting the ball pretty good that day."

Nylander is hitting the puck pretty well of late. He scored in a fourth straight game on Monday and now has 23 goals on the season, already a career high with 32 more games still to go. He's on track for 38 goals and is taking dead aim at that target.

"This is where I want to be," Nylander said. "I think I can score at this pace."

"There's opportunity for him to keep growing," Keefe noted. "I don't see this as a hot streak necessarily. Certainly, every player does have streaks when things go in for him, but I think this is more what Will's capable of."

Keefe believes promoting Nylander to the top power-play unit has helped him get in a better rhythm.

"My goal was to have him be a part of that core and that group and hope that it would leak into other parts of his game and I think the results have been there," Keefe explained.

Nylander is among the league leaders in goals from the inner-slot area this season. He's been effective in getting to those spots and also isn't passing up shots quite as often.

"He's trying to shoot the puck a bit more than he used to," observed Kapanen, "and he’s got a tremendous shot and we all told him he needs to shoot more and (smile) I think he realized the puck will go in when you shoot more."

But that's not what the goalie believes has been the biggest change in Nylander's fifth NHL campaign.

"He's been skating really well this year," said Andersen. "I think I've been noticing that the most, he’s creating space for himself and finds himself in those good situations to score and the shot is so dangerous that he gets (the best of) most of the goalies."

Nylander's edge work is elite and it's always been a strength of his game. Why?

"It’s just something that (I focused on) since I was a little kid," Nylander revealed. "I liked watching Peter Bondra, I thought he was cool to watch when he was skating."

Nylander insists this isn't a hot streak: 'I think I can score at this pace'

With goals in four straight games, William Nylander insists that he isn't riding a hot streak, and believes this is the level he is capable of always playing at.

What did Kapanen think about playing Augusta National?

"It was something I'll never forget. I wish I could've stayed there longer, but I'll take the two rounds," the Finn said. "You look at the holes and you recognize them from TV, but it's different because on TV people are around and it looks more narrow than it is and then you get there and it’s empty and it’s breathtaking and it’s beautiful there. I was very lucky."

Like Andersen, Kapanen managed to birdie No. 12, but he wasn't willing to provide many more details.

"I knew it was going to be hard," Kapanen said with a smile. "I don't even want to tell you what I shot, but it was an amazing moment."

The right winger was more expansive when it came to the freak injury that knocked him out of Monday's game after just one period.

"I think it was my second shift and I just tried to hit the guy and my elbow kind of caught the dash or something," Kapanen recalled. "Nothing severe, but when that area gets a little bruised up it kind of shut down my whole arm and I didn't have any power so we called it after the first period. We're hopeful for tomorrow."

Kapanen practised in a regular sweater and on his regular line with Pierre Engvall and Andreas Johnsson.

"I felt good," Kapanen said. "I wasn't trying to shoot too many pucks or shoot too hard, but I felt good."

"I'm optimistic," said Keefe. "Both watching him and talking to him, it seems he's recovered well through the night and feeling better today and has more mobility and strength and got through practice with no issues so as long as it continues that way he'll be in tomorrow."

After sustaining an arm injury in the first period Monday against the Predators, Kasperi Kapanen was back at Leafs practice Tuesday on his normal line with Andreas Johnsson and Pierre Engvall, which is an encouraging sign for the winger.

'I don't want to tell you what I shot': Leafs foursome reflects on Augusta experience

During their bye week, William Nylander, Kasperi Kapanen and Frederik Andersen played a few rounds at Augusta National, and shared some of their experiences.