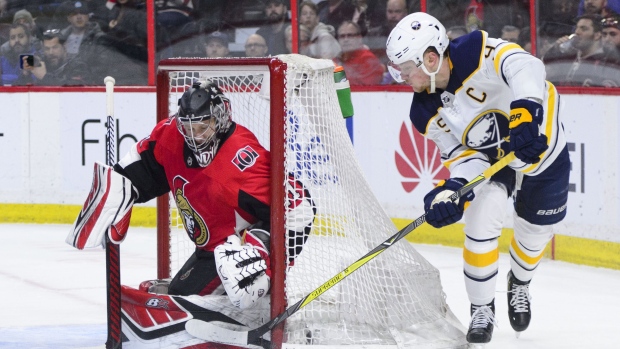 OTTAWA — There's no denying this has been a difficult season for Ottawa Senators goaltender Craig Anderson.

After going 97 days without a victory, Anderson was finally able picked up a win on Saturday in a 4-3 overtime victory over the Edmonton Oilers. It was his first win since Dec. 17 and he followed that performance with a 4-0 shutout against the Buffalo Sabres on Tuesday night, stopping all 35 shots he faced.

It was Anderson's second shutout of the season.

"I thought the guys all fought really hard, especially at the end so that kind of shows the chemistry and togetherness that has developed here," said interim head coach Marc Crawford. "I think they recognized it was a big win for Craig the other night and now to follow that up with the type of performance he had tonight I think guys were really pushing to make sure they didn't make any miscues to give up the shutout."

The players know only too well how rough some nights have been for Anderson this season as he's often had to face more than 40 shots.

"He's been facing so many shots every night and we never made it easy for him and he's always stood there and tried to do his best," said Thomas Chabot, who had two assists. "Last game he won his first game in a while and (Tuesday) to get a shutout is what he deserves. He played so well all year. He's been so huge for us so he totally deserves that."

Brian Gibbons had a goal and an assist to lead Ottawa (27-43-6), while Anthony Duclair, Rudolfs Balcers and Magnus Paajarvi also scored.

The win marked the first of a four-game homestand for the Senators, who are playing its first game after a three-game road trip through Western Canada where they went 1-2-0.

Things have been a struggle for the Sabres of late, but this seemed to be rock bottom in many ways.

"We're just giving up too much," said Kyle Okposo. "We gave up two tap ins, a power-play goal and I can't remember the first one. It's a lack of respect for our net. I didn't think we were ready to play (Tuesday) and that's pretty inexcusable…I'm running out of things to say."

Okposo made no excuses for the team's performance.

Ottawa took a 3-0 lead on a Balcers power-play goal at 5:54 of the third period and less than two minutes later made it 4-0 as Paajarvi scored his 10th of the season off a great passing sequence.

"A lot of times it's greasy goals these days and net front battles, which are good too, but those are the ones where you kind of work on in practice with a lot of passing," said Gibbons who initiated the sequence. "When it works out it's nice."

Trailing 2-0, the Sabres had a much better second period, but were unable to find a way to beat Anderson.

Notes: Ottawa was without veterans Zack Smith and Cody Ceci as both are dealing with injuries. Buffalo's William Borgen made his NHL debut Tuesday.