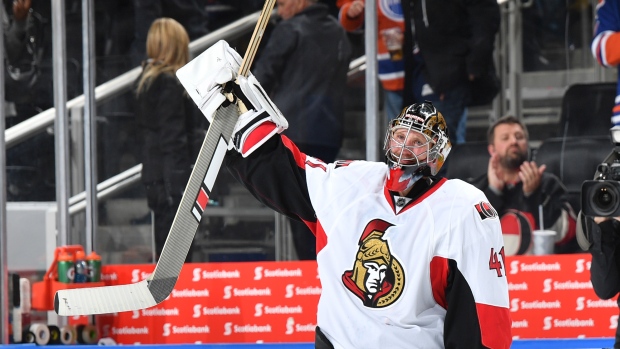 EDMONTON — Craig Anderson made 37 saves to record his second shutout in as many starts, as the Ottawa Senators were able to come away with a 2-0 victory against the red-hot Edmonton Oilers on Sunday.

Anderson returned to the Senators on Saturday night after leaving the team on Thursday to be with his wife, Nicholle, who has been diagnosed with cancer.

Mike Hoffman and Bobby Ryan scored for the Senators (5-3-0), who have won two of their last three.

There was no scoring in a rather sedate opening period, with Edmonton putting seven shots on Anderson, and the Senators taking four on Oilers starter Cam Talbot.

Edmonton had a great chance seven minutes into the second period, but Anderson made a big kick save on Oilers rookie Jesse Puljujarvi.

Ottawa finally broke the deadlock 12:18 into the middle frame as Tom Pyatt was rewarded for some hard work, sending a backhand pass from behind the net in front to Hoffman, who scored his first of the season.

Hoffman then hit a post with a power-play blast later in the period.

Anderson made another huge save midway through the third, stopping Jordan Eberle from point-blank range.

Ottawa put the game away with an empty-netter from Ryan with 32 seconds remaining.

Both teams return to action on Tuesday, as the Senators head home to face the Carolina Hurricanes and the Oilers embark on a five-game road trip, starting in Toronto.

Notes: It was the first of two meetings this season between the two teams. The next time they will meet is on January 8th in Ottawa… Anderson started the game on Sunday due to goaltender Andrew Hammond sustaining a lower-body injury on Friday in Calgary… Edmonton's launch to the season was its best since the 1985-86 season, when the Oilers started 8-1-0.