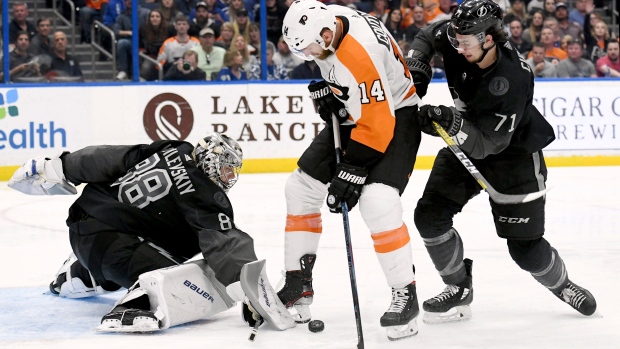 TAMPA, Fla. — Andrei Vasilevskiy stopped 30 shots and the Tampa Bay Lightning set a franchise record for consecutive home wins in a 5-3 victory against the Philadelphia Flyers on Saturday.

Alex Killorn, Nikita Kucherov, Brayden Point, Cedric Paquette and Carter Verhaeghe all scored for Tampa Bay, which won its 11th game in a row on home ice. The Lightning also won their 10th consecutive game overall to become the third team in NHL history to have two separate winning streaks of at least 10 games in the same season.

“To go on a run like that is pretty cool. Everyone is having fun around the room,’’ Lightning centre Anthony Cirelli said. “At the end of the day, though, it’s still just part of the season and we just have to continue trying to be better.’’

The Flyers, which fell to 13-15-3 on the road, remain two points ahead of idle Carolina for the No. 2 wild card spot in the Eastern Conference.

“As far as believing in this group and always working hard and trying to do the right things, there’s no doubt we’re trying to do that,’’ Flyers coach Allain Vigneault said. “We just finished a challenging stretch here of five games in five different cities. We’re going to go home (and) rest up.’’

Killorn put Tampa Bay in front early when his centring pass from the right circle hit the skate of Philadelphia defenceman Ivan Provorov and bounced right back to Killorn, who banked a shot off the shoulder of Hart and in at 3:17 for his 22nd of the season.

Paquette made it 2-0 at 14:55 as he was open from the slot to take a pass from Tyler Johnson out of the corner for a snap shot past Hart for his sixth of the season, second in as many games.

Verhaeghe’s eighth of the season, off a 3-on-2 rush feed from Victory Hedman, put the Lightning up 3-0 at 2:35 of the second period.

Provorov put Philadelphia on the board with a power-play goal, blasting a slap shot from just inside the blue line past Vasilevskiy at 8:57.

The Flyers struck twice in a span of 44 seconds to make it a one-goal game with 3:15 left in the third period. Van Riemsdyk scored on the power play at 15:31 and Giroux made it 4-3 off a rebound at 16:15 with an extra attacker on the ice.

“For the last two periods we played the way we wanted to, a little more aggressive,’’ Flyers captain Giroux said. “That was an intense game. A lot of things were happening. We were down 4-1 with seven minutes left and made a pretty good push.’’

Kucherov put the game away with an empty-net goal with 21.6 seconds left.

Lightning: At Colorado Avalanche on Monday