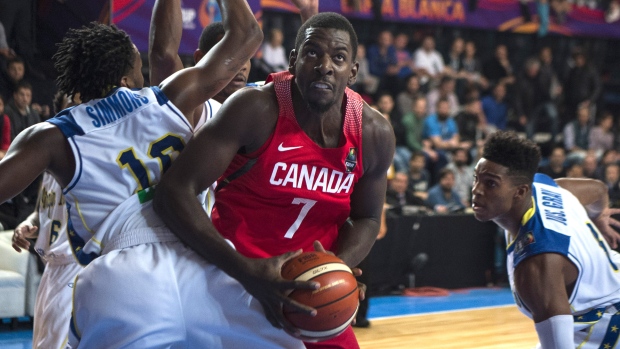 OSHAWA, Ont. — Former NBA player Andrew Nicholson had 16 points and seven rebounds to lead Canada's men's basketball team to an 89-72 win over the Dominican Republic on Friday in the opener of their FIBA AmeriCup 2021 qualifying tournament.

Phil Scrubb had 14 points and Kaza Kajami-Keane added 12 for the Canadians.

"We just found our rhythm, kept trusting each other," Nicholson said. "We had a good few days in practice and we just continued to stay the course."

Victor Liz led the Dominicans with 18 points and Eloy Vargas had 16.

The Dominican team started the game strong, leading 22-17 after the first quarter and 40-35 at halftime.

But Canada outscored its opponent 30-18 in the third quarter to head into the final frame up 65-58.

The FIBA AmeriCup 2021 qualifiers feature 16 teams from the Americas zone divided into four groups. Teams play each other twice, home and away, during the qualifying phase with three windows set for Feb. 21-24, 2020, November 2020 and February 2021.

Canada travels to Santo Domingo for a rematch against the Dominicans on Feb. 24. Cuba and U.S. Virgin Islands are also in Canada's group.

Herbert is coaching Canada's team at this stage in the tournament in place of Raptors head coach Nick Nurse.

Nicholson highlights Canada's roster at the tournament. The 30-year-old was available to play for Canada after the new coronavirus forced the Chinese Basketball Association to postpone its season.

Nicholson, who played five seasons in the NBA with Orlando, Washington and Brooklyn, was playing for the Guangzhou Loong Lions.