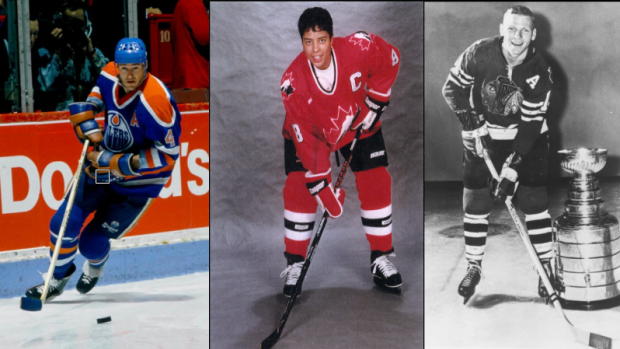 Hockey Canada announced its Class of 2021 for the Order of Hockey in Canada on Friday with Angela James, Kevin Lowe and Bill Hay set to join the ranks later this year.

The trio will be honoured at a gala dinner in June.

“The 2021 distinguished honourees have made an immeasurable impact on the game, with each of them taking a different path to advancing hockey in Canada and internationally. Bill, Angela and Kevin have all had unique hockey experiences, but are all equally deserving of this honour,” Hockey Canada CEO Tom Renney said in a statement. “To be recognized as a distinguished honouree of the Order of Hockey in Canada is one of the most prestigious accomplishments an individual within the game can receive. On behalf of my colleagues at Hockey Canada, the Order of Hockey in Canada selection committee and our board of directors, I would like to congratulate Bill, Angela and Kevin on this achievement, and we look forward to celebrating their contributions to the game.”

The first Canadian woman inducted into the Hockey Hall of Fame in 2010, James was a fixture on Canada's women's national teams from 1990 to 1999. In 50 international games, the Toronto native recorded 54 and won gold medals at four IIHF Women's World Championships. A pioneer of the women's game, James was also elected to the IIHF Hall of Fame (2008) and Canada's Sports Hall of Fame (2009).

Lowe played in 19 NHL seasons with the Edmonton Oilers and New York Rangers, winning six Stanley Cups. Internationally, the Lachute, Que. native was a key member of Canada's management team at the Winter Olympics that won gold on three occasions in 2002, 2010 and 2014. Lowe is set for induction into the Hockey Hall of Fame as a member of the Class of 2020.

Hay was the president of Hockey Canada for 1990 to 1995 and helped spearhead the merger of Hockey Canada and the Canadian Amateur Hockey Association following a professional career that saw the Lumsden, Sask. native win the Calder Trophy as the NHL's rookie of the year in 1960 and the Stanley Cup in 1961, both as a member of the Chicago Blackhawks. Hay also served as the chairman of the Hockey Hall of Fame from 1998 to 2013

The Class of 2021 was selected by a 12-member committee and voted upon by secret ballot.