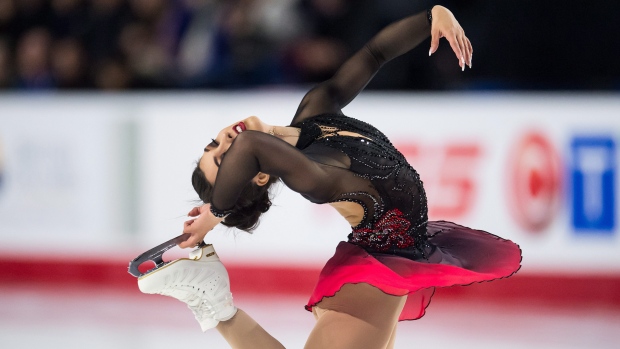 TORONTO — Gabrielle Daleman has lived through seemingly a lifetime of health issues since helping Canada win gold in the team event at the 2018 Pyeongchang Olympics.

Now, less than a week before the Canadian figure skating championships, the 21-year-old from Newmarket, Ont., is suffering from pneumonia.

"I'm feeling better injury-wise, but unfortunately three weeks ago I started getting sick," Daleman said on a conference call Thursday. "So I'm getting that treated, and just doing some extra cardio while training right now."

This season hasn't been much smoother — she tore two ligaments in her ankle and strained her Achilles tendon in the fall.

"So I ended up in a (walking) boot for three weeks, and was off the ice for about a total of five, and then had to go back to just doing stroking for two weeks, and then I've been doing programs ever since," she said.

Daleman is a two-time Canadian champion and even when she's not in peak form is considered a favourite to win. Plus, this season's field is missing two key women: world champion Kaetlyn Osmond has retired while last year's national champion Alaine Chartrand is taking a break from competition.

Daleman said reclaiming her national title would "be great," but it's not her focus.

"My goal is just to show everyone how hard I've been working," she said. "And after two awful years, personally, physically and mentally, my main goal is just to get out, skate, and just be happy, and fall back in love with the sport that I did, and just show everyone that I back and that I'm still in the game. And that even though I've been through the highest highs and the lowest lows, nothing can hold me back or break to me."

Daleman credits coach and family for propping her up through the down times.

"Everyone's just been so positive, and just reminding me of who I am,what I'm capable of," she said. "And they keep telling me, 'Your time is not done, you are capable of being the best, and you are going to do great things, and you will be one to remember.'"

Daleman changed training locations, leaving the Toronto Cricket Club to follow coach Lee Barkell to the nearby Granite Club. Her dad Michael is her off-ice coach, Lori Nichol is her choreographer, while ice dancer Kaitlyn Weaver (she and partner Andrew Poje are taking the season off) helped choreograph her short program.

"(Weaver) definitely pushed me to my limits in my short," Daleman said. "There's a lot of moves that I didn't think were possible, especially for a single skater to go into jumps and spins like dancers do, but she made me do it, she pushed my limits, and she has such a positive attitude. She calls me her little sister. She's like an older sister to me, and I'm just so grateful that I get to work with one of my idols."

Daleman isn't alone in her struggles with mental health issues. American star Gracie Gold entered an inpatient therapy clinic in Arizona in 2017 to address an eating disorder, depression and anxiety. Gold didn't skate at the U.S. nationals last year but has said she planned to compete at the championships this month in Greensboro, N.C.

Daleman said Gold reached out last season and the two have remained in touch.

"We just said we've both been through a lot, we're here for each other, and we're stronger than people know and people think and we've just got to stay strong and still be here and be ourselves," Daleman said. "That's what we have to focus on is just being our true selves not what people want us to be.

This report by The Canadian Press was first published Jan. 9, 2020.