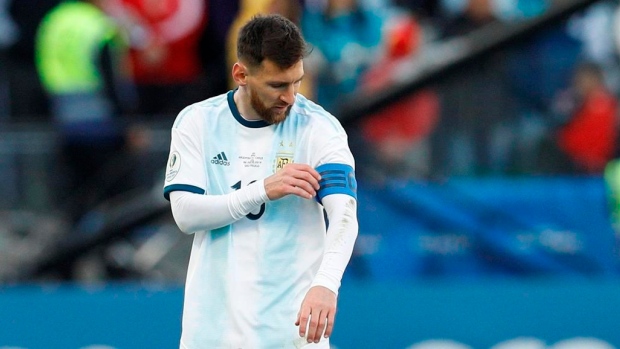 Gone was the shy player who rarely showed any emotion on or off the field. In was an outspoken leader who got mad at referees and made corruption accusations against South American soccer officials.

Messi still couldn't end his title drought with the national team, but he displayed a new side of himself during the South American tournament.

Messi wasn't the introverted player who often stayed away from the spotlight with Barcelona and the national team. Instead, he took on a leadership role and made sure his voice was heard.

His outburst after Argentina's win over Chile in Saturday's third-place game caught most by surprise.

"We shouldn't take part in this corruption," Messi said after being sent off in the first half of his team's 2-1 win in São Paulo.

"There was lack of respect toward us during this Copa América," he said. "We could have done better, but they didn't let us make it to the final. Corruption and the referees are not letting the fans enjoy football. This is ruining football."

Messi was red carded for getting into a shoving match with a Chilean player, also something unusual for the Argentina captain. His only other straight red with the national team had come in his international debut in 2005.

Messi had earlier complained about the refereeing after Argentina's loss to Brazil in the semifinals, hinting the result was expected because the hosts were allegedly in charge of South American soccer.

When asked if he didn't fear being suspended for his comments, Messi said "the truth needed to be told."

Earlier in the tournament, Messi had also complained about the poor field conditions at the Copa América, saying they made the ball look like a rabbit.

The rants were surprising for someone like Messi, who in the not-to-distant past did all he could to avoid the media. It was only a few month ago that Messi took part in his first Barcelona news conference in four years.

But even before that there were signs that Messi was changing his approach. Last year he began taking on the role of Barcelona's undisputed team leader after inheriting the captain's armband from Andrés Iniesta. He was more active instructing his teammates on the field, and started giving more post-match interviews.

That more proactive attitude was seen from the start of the Copa América, when Messi arrived giving his opinion about the team and speaking about his importance as a leader.

Another sign of the new Messi was on display when he began loudly singing the Argentine national anthem before matches at the Copa América. The old Messi drew a lot of criticism from Argentine fans for his lacklustre approach to the anthem.

At 32, Messi was the oldest player on the Argentina roster, and one of three players from the team that lost the 2014 World Cup final to Germany, along with Sergio Agüero and Ángel Di María.

Despite his changed attitude, Messi was far from his best on the field again. He impressed in the final two matches, but it still wasn't enough to carry Argentina to a title.

This year's Copa América semifinal exit is just the latest disappointment for him with the national team, coming after losses in the final of the South American tournament in both 2015 and 2016.

Messi's only title with Argentina was with the under-23 squad at the 2008 Beijing Olympics. The senior team is enduring a 26-year title drought in all competitions.

"We leave with our heads high and the feeling that this time football wasn't fair with us," Messi said on Instagram.