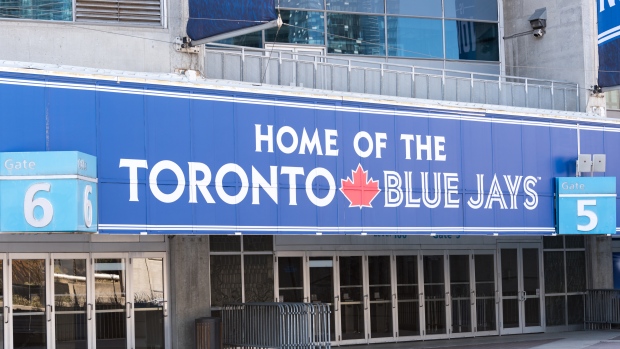 TORONTO — When the Toronto Blue Jays woke up Thursday morning, they were still in Dunedin, Fla.

The charter flight on standby for when/if the Canadian federal government approves their trek north to Toronto was still grounded.

Whether that changes Thursday remains to be seen, but the Jays are inching closer and closer to being behind the rest of the league, with workouts around baseball starting Friday and Saturday in every team’s home ballpark.

The last official update from the Blue Jays on Monday left open the possibility of remaining in Florida to conduct training, but there’s no word on when, exactly, they would pull the plug on Toronto and make the decision to unpack the bags and stay in Dunedin.

The Jays, however, are still confident federal approval will happen, maybe as early as Thursday afternoon.

One item on its way to being checked off the list is intake testing, as players and staff were given full COVID-19 assessments on Wednesday in Dunedin, and more testing is expected Thursday.

But starting Friday — the first official day teams can work out — there are only 21 precious days to get ready before the expected July 24 season opener.

Earlier this year, for instance, the Jays would’ve had 34 days from their first full team workout to the day camp broke to get ready. Pitchers and catchers would’ve had even longer.

There are many unanswered questions at this point, and Major League Baseball is holding the schedule until the Jays’ situation is sorted.

What happens if the Jays only get approval to hold camp and not to host games with visiting teams?

The final sign-off from the federal government is what’s holding everything up.

Reports have indicated recently that both the provincial and municipal governments are fine with the Blue Jays coming to Toronto to conduct summer camp, but the prospect of visiting teams crossing the border — which could happen as soon as July 19 if the Jays want to schedule up to three exhibition games at the end of spring training 2.0 — is a sticking point.

And it’s a very reasonable one, considering the federal government has the border still closed to non-essential travel until at least July 21 and the mandatory 14-day quarantine is still in effect.

If games aren’t approved, the Jays could conceivably hold camp in Toronto and then return south once games begin if they deem that to be safer, but it’s logistically more challenging and doesn’t make a whole lot of sense with the entire team already a stone’s throw from the Dunedin facilities.

The Jays are hoping for clarity by the end of the work week.

What happens if a player tests positive for COVID-19 during intake testing and where do they go?

The Jays began MLB’s intake testing process Wednesday and then isolated everyone in the Dunedin area.

If a player or staff member tests positive they will not accompany the team to Toronto.

They’ll have to then go through the quarantine process and test negative twice — an MLB mandate — in order to return.

What do we know about the Blue Jays’ Rogers Centre modified quarantine plan?

A huge block of rooms is on hold at the 348-room Marriott City Centre Hotel that’s attached to Rogers Centre, and they’ll stay on hold until the Jays finalize their plans.

It’s expected that the entire Jays team, as well as any visiting teams, would be confined to the hotel and stadium, moving from their rooms to the baseball facilities below when need be.

How far behind the other 29 MLB clubs will the Jays be when they finally get on the field?

With teams starting workouts either Friday or Saturday, the Jays need to get on the field by the end of the weekend.

That would mean arriving in Toronto on Saturday at the very latest, leaving them one day behind the rest of the baseball.

Not ideal, but not the end of the world.

It’s hard to envision the club letting this drag into next week without the team starting preparations, which could mean staying in Dunedin, as the Jays outlined in Monday’s press release.

“Upon the conclusion of intake and isolation, the team will either board a charter flight to Toronto to begin training under a modified quarantine, isolated from the general public, or remain in Florida to conduct training,” the team statement read.

How will the Jays structure summer camp workouts for 60 players?

With each team using their home ballparks instead of sprawling spring training facilities with backfields, batting cages and gang mounds, most clubs will split their 60 players up into two main groups and run two separate workouts.

Social distancing guidelines will likely take some time to get used to, so there will likely be some awkward moments early on as players figure out ways to stay away from teammates.

Work has been done to ready the Rogers Centre field, but there’s no word on if they’ve built additional resources like mounds or makeshift cages.

The number of players the Jays will have in camp has already started to fluctuate.

With MLB deciding against releasing COVID-19 positives, the only way a team can go over 60 is by filing it with the league.

Will media be allowed to attend workouts at Rogers Centre?

Yes, media will be allowed in the building once workouts begin.

Masks will be worn at all times, social distancing practices will be in place, and there will be no face-to-face interviews.​