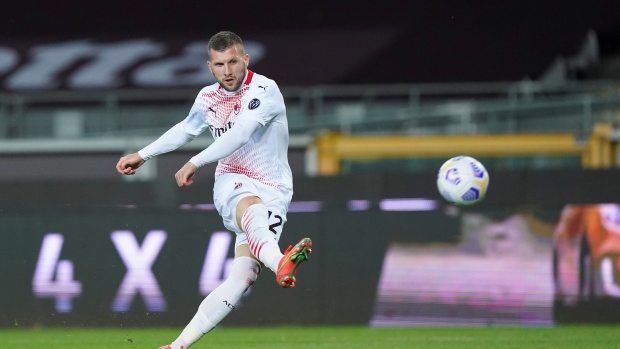 MILAN (AP) — Ante Rebić netted a 12-minute hat trick in the second half to help AC Milan rout Torino 7-0 in Serie A on Wednesday and strengthen its chances to qualify for the Champions League.

The two are a point above Napoli and three above fifth-place Juventus, which won 3-1 at Sassuolo. There are two rounds remaining in Serie A and the top four qualify for next season’s Champions League.

Milan was without star striker Zlatan Ibrahimović but Hernández gave it the lead in the 19th minute and Samu Castillejo hit the woodwork before Franck Kessié converted a penalty in the 26th.

It took until early in the second half before Milan extended its advantage through Brahim Díaz and the floodgates then opened.

Hernández doubled his tally in the 62nd and Rebić netted his first five minutes later.

BUFFON TO THE RESCUE

World Cup-winning goalkeeper Gianluigi Buffon announced on Tuesday that he will leave Juventus at the end of the season. Until then, the 43-year-old Buffon is still rescuing his side.

Buffon saved an early penalty from Domenico Berardi before goals from Adrien Rabiot, Cristiano Ronaldo and Paulo Dybala secured the win for Juventus.

Lazio also still has a chance of qualifying for the Champions League after Ciro Immobile scored in stoppage time to help it to a 1-0 win against already-relegated Parma.

Lazio is five points behind fourth-place Napoli but has a match in hand.

Spezia and Cagliari boosted their hopes of avoiding relegation by drawing against Sampdoria and Fiorentina, respectively.

Spezia is level on points with Torino, which has played a match less than most of its rivals, and four points above 18th-place Benevento.

Cagliari is five points above the bottom zone.