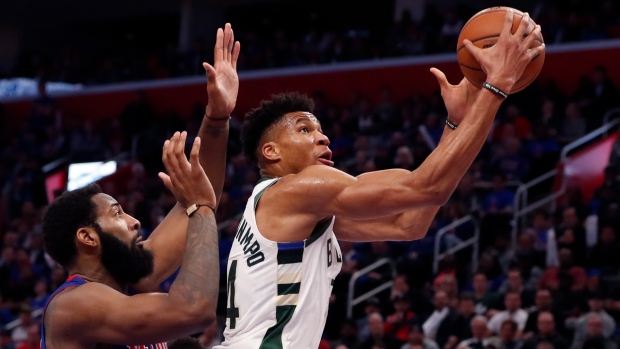 DETROIT — Giannis Antetokounmpo drove to the basket and drew yet another foul, this one a hard hack on the arm by Blake Griffin.

Griffin fouled out and headed to the bench, and the home crowd gave him a standing ovation. Then many fans headed toward the exits.

Antetokounmpo and the Milwaukee Bucks were on their way to another rout against Detroit.

Antetokounmpo scored 41 points, and the Bucks beat Detroit 127-104 on Monday night, completing a four-game sweep of the Pistons and advancing to the second round of the playoffs for the first time since 2001. The last time Milwaukee won a post-season series, the Bucks made it all the way to the conference finals. This year's team isn't there yet, but so far Milwaukee looks the part of the top seed in the East.

"I remember our first playoff series (in 2015)," Antetokounmpo said. "Chicago, the last game, Game 6, they beat us by 50 or something insane. But where we were and where we are right now, it's been an unbelievable journey."

Milwaukee closed the third quarter with a 17-3 run, taking a 10-point lead into the fourth after the Pistons had led much of the way. Detroit set an NBA record with its 14th consecutive playoff loss, a skid that began in 2008.

The Bucks will face Boston in the second round. The Celtics are coming off a sweep of their own against Indiana.

Reggie Jackson scored 20 of his 26 points in the first half for Detroit. Griffin fouled out with 7:06 remaining after scoring 22. Griffin missed the first two games of the series with knee problems.

"Blake played his heart out with basically one leg," said Pistons coach Dwane Casey, whose voice was hoarse at his postgame news conference. "He fought through a lot of pain, swelling."

Griffin was on the bench for much of Milwaukee's crucial run. He sat for the final 4:35 of the third. Antetokounmpo scored 16 points in that quarter, half of which came on free throws.

Detroit led 20-8 early on after a dunk by Griffin. The Pistons were up 62-56 at halftime but still couldn't prevent a fourth straight blowout at the hands of the team that had the NBA's best regular-season record. Milwaukee won the four games by a total of 95 points, and no game was closer than 16.

Bucks: Malcolm Brogdon remains out because of a right foot injury, but Budenholzer said he might have a better sense in the next 3-5 days about a timetable for his availability. ... The Bucks won every game they played against Detroit this season, including all four in the regular season. ... Milwaukee had not swept a best-of-7 series since the 1983 conference semifinals against Boston.

Pistons: Detroit's most recent post-season victory was May 26, 2008, in Game 4 of the Eastern Conference finals against Boston. The New York Knicks lost 13 straight playoff games from 2001-2012, but the Pistons have now eclipsed that mark.

Milwaukee went 31 of 41 on free throws, while Detroit was only 9 of 12. Casey was called for a technical foul in the third, and the fans weren't at all pleased with the officiating.

At one point, Milwaukee had a 32-8 edge in free throw attempts. A stat showing that was put on the main video board, but there didn't seem to be any further reaction from the crowd.

The Bucks outscored the Pistons 62-42 in the paint and finished with 10 blocked shots to Detroit's one. Brook Lopez had five blocks and Antetokounmpo had four, including one on Ish Smith that looked more like a volleyball spike .

Pistons owner Tom Gores was courtside at the game. This was the team's second playoff appearance since he took over and the first at Detroit's downtown arena.

"It's just the beginning of what we can do here," Gores said. "Dwane and I and the team accomplished a goal by getting in the playoffs. We're not happy with the way it ended."

The Bucks move on to face the Celtics, who knocked Milwaukee out of the playoffs in seven games last year.