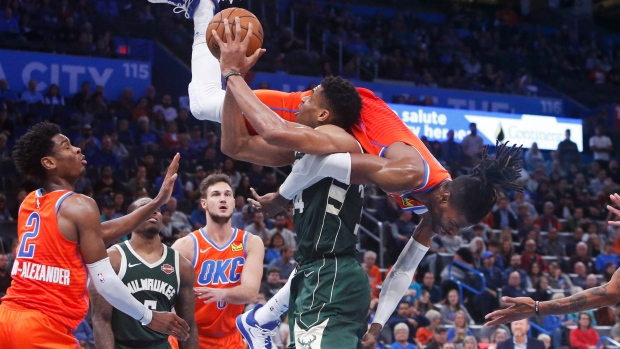 OKLAHOMA CITY — Giannis Antetokounmpo couldn't contain his frustration after a subpar first half.

Somewhere between the court and the locker room, the Milwaukee Bucks star kicked — and destroyed — a sign with a Thunder logo that is part of a temporary barrier.

He channeled his fire in the second half. He scored 24 of his 35 points after the break to help the Milwaukee Bucks rally and beat the Oklahoma City Thunder 121-119 on Sunday night.

His first half, by his standards, was forgettable. He scored 11 points on 4-for-8 shooting and had six rebounds. Most important, the Thunder led by six.

"I wasn't playing good basketball," he said. "I wasn't being as aggressive as I wanted."

Thunder guard Chris Paul said it's a challenge to defend a 6-foot-11 player who can drive.

Eric Bledsoe added 25 points and nine assists for the Bucks, who have won five of six.

The Thunder led by nine points early in the third quarter before Milwaukee rallied and led 87-80 heading into the fourth.

Oklahoma City's Danilo Gallinari hit a 3-pointer with 32.3 seconds left to tie the game at 114, but Milwaukee's Brook Lopez made a 3-pointer at the other end with 25.4 seconds remaining.

Gallinari missed a clean look at a 3, then Milwaukee's George Hill made two free throws with 10.5 seconds left to put the Bucks in control.

"We always fought back, and we didn't shoot the ball the way we usually do, especially me," Gallinari said. "It was a very good game. Unfortunately we couldn't get it done."

Bucks: F Kyle Korver sat out with a head contusion. ... G Khris Middleton left the game with a left thigh contusion and did not return. He finished with 10 points. ... Lopez was called for a technical foul in the fourth quarter.

Milwaukee shot 60.5% in the second half. The Bucks made 21 of 30 shots inside the 3-point line after the break.

The Bucks host the Chicago Bulls on Thursday.

The Thunder visit the Indiana Pacers on Tuesday.