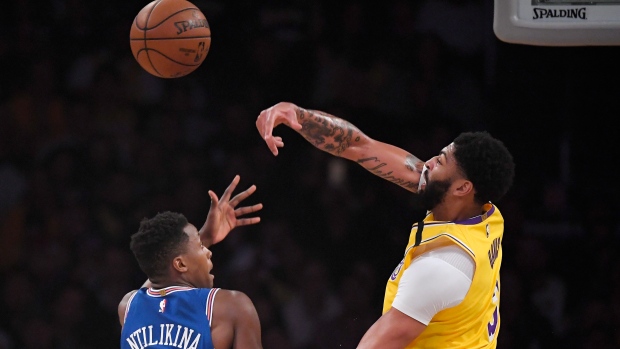 LOS ANGELES — Anthony Davis left in the third quarter after bruising his lower back on a painful fall during the Los Angeles Lakers' sixth straight victory, 117-87 over the New York Knicks on Tuesday night.

Davis bruised his sacrum — the bottom part of his spine above the tailbone — when he attempted to block Julius Randle's driving shot. He got knocked off balance and fell awkwardly to the court, landing hard on his back with 2:45 left in the third.

The six-time All-Star pounded the court in pain and stayed down for roughly two minutes, but eventually rose with his teammates' help and then slowly walked off unaided.

X-rays were negative, but Davis didn't return to the game. His agent, Rich Paul, said his client felt extremely sore.

Davis, who will be an unrestricted free agent this summer, is the primary reason behind Los Angeles' swift rise to the top of the Western Conference. He is averaging 27.7 points and 9.5 rebounds per game in his first season after the Lakers traded most of their young core to New Orleans for him.

R.J. Barrett scored 19 points for the Knicks, and Randle had 15 points and 10 rebounds against his former team. New York dropped to 0-3 on its four-game West Coast trip.

New York's Bobby Portis was ejected early in the second quarter for a flagrant foul on Caldwell-Pope. Portis clocked Caldwell-Pope in the head while the Lakers veteran was going up for a fast-break dunk, knocking off Caldwell-Pope's headband and sending him to the locker room.

The Lakers joined the NBA-leading Milwaukee Bucks as the league's only 30-game winners so far this season. Los Angeles hadn't won 30 games this quickly since the 2008-09 season, when Kobe Bryant's Lakers started 30-6 and eventually won the 15th of their 16 NBA titles.

Los Angeles had little trouble holding off the Knicks in the second half despite Davis' abrupt absence. The Lakers pushed their lead to 30 early in the fourth quarter with a run led by James, who scored 16 points in 16 minutes in the second half.

Dwight Howard had another strong game with eight points, 13 rebounds and three blocked shots. He also hit the eighth 3-pointer of his career in the fourth quarter.

Knicks: Former Lakers forward Reggie Bullock started in place of Marcus Morris and scored seven points in 27 minutes. Morris sat out with a sore neck. ... Portis had two points on 1-of-5 shooting in six minutes.

Lakers: James thought about sitting out after fighting an illness all day, but elected to play. ... Avery Bradley scored 12 points despite sitting out the end of Sunday's game with an ankle injury. Bradley had no swelling and didn't need to miss a game, he said. ... The Lakers didn't win their 30th game last season until Feb. 27, when they were 30-31.

Knicks: Visit the Utah Jazz on Wednesday to wrap up their trip.

Lakers: At the Dallas Mavericks on Friday to open a two-game trip.