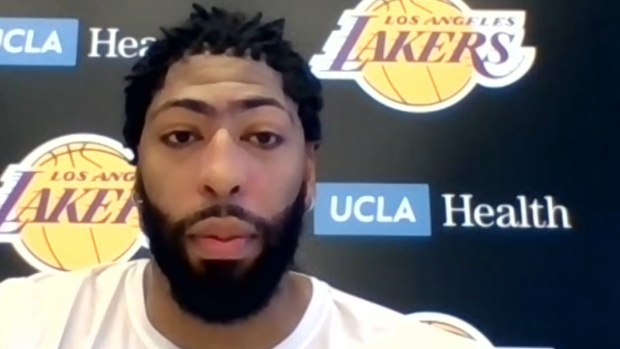 LOS ANGELES — The sudden suspension of the NBA season was a double disappointment for Anthony Davis.

“It happened on my birthday, which is kind of a bummer because I couldn't do anything,” the Los Angeles Lakers' seven-time All-Star big man said with a laugh.

Davis turned 27 on March 11 when the NBA shut down amid the coronavirus pandemic. After a few homebound months spent largely improving his video game skills, Davis is back at work as the Lakers attempt to achieve their interrupted goals.

Davis, LeBron James and the Lakers are gathered for individual workouts this week in preparation for their trip to Orlando, where they're among the favourites to win it all in this extraordinary NBA season. The Lakers (49-14) were leading the Western Conference and preparing for their first playoff run together when everything stopped.

Davis still loves the Lakers' chances of contending for the franchise's 17th championship.

“Actually, I think our chances are higher, just because we’re all rested and we’re all ready to go,” Davis said Thursday in his first extensive public comment since March. “If anything, our chances got higher, and it’s going to be about just who wants it more.”

The time off was a particular benefit for Davis, who mostly played through his usual assortment of nagging injuries during his first season after engineering a trade from New Orleans to the Lakers so he could improve his chances of winning a ring. Davis had problems with his elbow, tailbone and shoulder at various points of this season, but they're all memories now.

“It’s been good for me to let some of the lingering injuries I had toward the time when the NBA stopped kind of recover and heal," Davis said. "(I can) get back into the best version of myself. I feel 100% healthy. Well, I don’t ‘feel,’ I am (100% healthy). I feel like I’m ready to go.”

Davis has played splendidly when healthy for the Lakers, averaging 26.7 points, 9.4 rebounds and 3.1 assists with 27 double-doubles in 55 games. He also averaged 2.4 blocks while playing stellar defence for one of the NBA's top defensive teams.

“Hopefully the best is yet to come,” said Lakers coach Frank Vogel, who praised Davis' ability to play through injury. “Any time Anthony Davis takes the floor, you have a chance to see something special. He continues to get better, and he works extremely hard.”

While Davis respects the decision of Lakers starting guard Avery Bradley to skip the NBA's restart, Davis says he never considered that option with so much to gain from the return.

“We’re in a position to win a championship, but (also), I think we’re stronger together,” Davis said. “Everyone in Orlando, we’re going to obviously be talking about everything that’s going on from a social injustice standpoint. And ... the NBA, I think at that time we’re going to be the only ones on TV. So I think we’re able to have more people in the room from other teams, and receive other ideas and figure out how we can change the world.”

The Lakers still don't know whether Dwight Howard will join them in Orlando, but Vogel believes it's unlikely Davis will have to play extensively at centre even if Howard doesn't play. That's undoubtedly good news for Davis, who prefers to play power forward.

Davis said he has spent his time off with family. He has been eating well and logging plenty of hours with a controller in his hands.