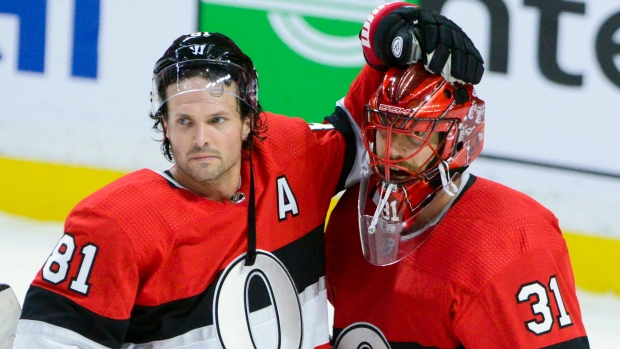 OTTAWA — Wins haven’t come easily or often for the Ottawa Senators this season, but Monday night they found a way to beat one of the top teams in the league.

The Senators (13-17-1) were led by Anthony Duclair, who had two goals and one assist, and Anders Nilsson with 38 saves in a 5-2 victory over the Boston Bruins.

“We played a pretty solid game,” said Nilsson. “We came out and played a really good first period and that set the tone for the rest of the game for us.”

Chris Tierney, Artem Anisimov and Jean-Gabriel Pageau also scored for the Senators, who were playing their first home game since returning from a five-game road trip (1-4-0).

Patrice Bergeron and Jake DeBrusk scored for the Bruins, who were playing the first of four road games. Tuukka Rask made 23 saves in his first loss in regulation since Nov. 8.

The Bruins are now 0-2-1 in their last three and have lost back-to-back games in regulation for the first time this season.

“We’re going through a tough stretch in terms of getting our energy level where it needs to be,” said Bruins coach Bruce Cassidy. “If you’re not competing hard on the puck, around the puck, on the puck in this league you’re not going to beat anybody. Ottawa was just better than us, they won more races and they were more competitive early on.”

The Bruins were 1 for 5 with the man advantage and are just 2 for 17 through their last five.

“At the start of the year our power play was carrying us,” Cassidy said. “A night like (Monday) we probably get two on it early in the year and ends up being the difference in the game and maybe a timely save mixed in there, but now you put those two things not going in there and suddenly we’re in the loss column.”

Leading 3-1 to start the third, the Senators did a good job of containing the Bruins, who were pressing to close the gap.

With the Bruins on the power play, Rask was pulled for a 6 on 4 advantage, but Pageau was able to pick off a pass and break in for an empty-net goal to seal the win with just under three minutes remaining.

Nilsson gave lots of credit to those in front of him who blocked shots and found ways to cut lanes. In the end the Senators had 29 blocked shots.

“It’s great as a goalie to stand back there and see when the guys are playing so hard and sacrificing themselves and blocking shots and battling through even when they’re really tired,” Nilsson said. “It was a great team effort and great job from everyone.”

DeBrusk scored a power-play goal 43 seconds later during a scramble in front of Nilsson, but that was as close as the Bruins got as Duclair added another empty-net goal.

Duclair now has five goals and one assist through his last three games. He was also on the ice late in the game and on the penalty kill, which is a new experience for the 24-year-old.

“I’m getting a big opportunity here and probably the most ice time I’ve gotten in my career so I don’t want to take that for granted,” said Duclair. “I’m getting the confidence from the coaching staff and my teammates here so I just want to continue doing that.”

Ottawa made it a two-goal game early in the second as Vladislav Namestnikov intercepted Rask’s pass from behind the net and found Tierney, who took advantage to bury his fourth of the season and snap a 22-game goalless drought.

Boston failed to capitalize on three power-play opportunities in the second, with Nilsson deserving much of the credit after making some big saves.

The Senators held a 2-1 lead after the first 20 minutes.

Ottawa opened the scoring 1:35 into the game when Dylan DeMelo made a stretch pass to Anisimov, who broke through the defence and sent a backhander over Rask’s shoulder.

Duclair, with his 14th of the season, made it 2-0 as he took a Tierney pass in the slot to beat Rask glove side.

The Bruins cut the lead in half as Bergeron, who was making his return after missing the last seven games with a lower-body injury, took a cross ice pass from David Pastrnak and scored into a wide-open net.

Notes: The Senators will be without goalie Craig Anderson for at least a week. He tweaked his knee Dec. 7.

This report by The Canadian Press was first published Dec.9, 2019.