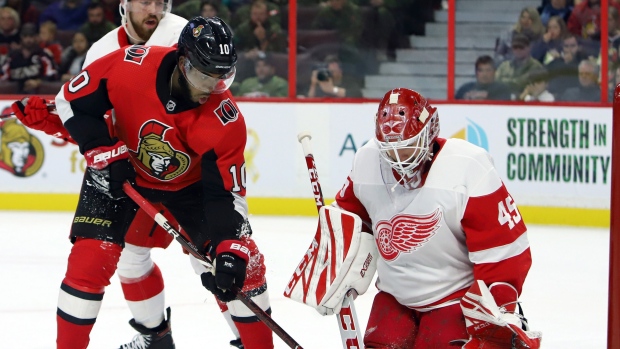 OTTAWA — The Ottawa Senators haven't had much to celebrate so far this season, but coach D.J. Smith was pleased with his team's effort on the penalty kill Wednesday night.

The Senators were a perfect five for five on the penalty kill en route to a 5-2 victory over the Detroit Red Wings that snapped a four-game losing streak.

"Our penalty kill wins us the game," Smith said.

Anders Nilsson made 34 saves for his first win of the season.

"I thought (Wednesday) was the worst defensively we've played in a while," said Red Wings head coach Jeff Blashill. "I don't want to take anything away from Ottawa, they played hard.

"I just thought that was as poor defensively as we've played. Sometimes when you try so hard you play a little bit dumb at times and you give up chances that you can't afford to give up."

The Senators led 4-2 to start the third and while the Red Wings had a few good chances, Nilsson was solid making a number of big saves.

Nilsson was making his second straight start after a solid performance in Dallas Monday in a 2-1 loss.

"I think we outworked them from the first minute to all the way through to the last," said Nilsson. "It was nice to see that we got rewarded for all the hard work."

Duclair scored his second, an empty-net goal, with just under two minutes remaining in regulation.

Trailing 1-0 to start the second period, the Red Wings took their first lead of the game by scoring twice in less than two minutes.

Justin Abdelkader found Helm in the circle and wristed a shot past Nilsson to get Detroit on the board. Shortly after, Bertuzzi was able to jump on a rebound and went top shelf to go ahead 2-1.

"We all just have to be a little bit better and play within our structure and do things the right way," said Abdelkader. "It's been a tough stretch here, but the 20 guys in here are the ones who are going to get us out of it. I believe in our group, we have a really good group, but we have to play a certain way to win."

The lead was shortlived as Borowiecki took a pass from Nick Paul and wristed it over Bernier's shoulder for his first goal of the season.

"He does it right every day," said Smith. "Everyone in that room knows how hard he works. He's serious about what he does, how hard he plays so it's good he gets rewarded. He knows what he gets paid to do — play defense, be hard — but his leadership in our room is second to none and it's nice to see him get one of those."

Ottawa regained the lead as Pageau, with his team-leading third goal, scored shorthanded to make it 3-2.

The Senators scored late in the period as Thomas Chabot made a great cross-ice pass to Duclair all alone in close.

A solid first period saw the Senators take a 1-0 lead on Tierney's third of the season. Bobby Ryan fanned on a backhand and Tierney jumped on the loose puck.

Logan Brown made his season debut after being recalled from the AHL's Belleville Senators.

Brown was given a great opportunity to showcase himself as he centered Brady Tkachuk and Anthony Duclair on the top line.

Notes: The Senators placed Colin White and Artem Anisomov on injured reserve Wednesday. White will miss three to five weeks with a sore hip flexor/groin, while Artem Anisimov is expected to be out up to 14 days with a lower-body injury. Detroit's Alex Biega and Danny Dekeyser were healthy scratches.