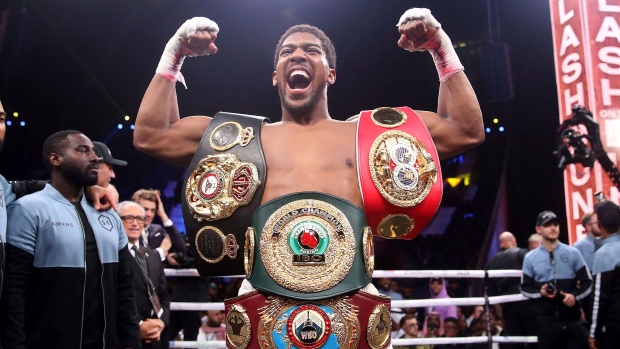 We soon may know who truly rules the heavyweight division.

Eddie Hearn, the promoter of the reigning WBA, IBF, WBO and IBO heavyweight champion Anthony Joshua, tells ESPN's Mark Kriegel that a deal has been signed that will see his client take on WBC and The Ring heavyweight champion Tyson Fury in two fights to unify the heavyweight titles in a blockbuster agreement between England's top two fighters.

"We'd like to get a site deal confirmed in the next month," Hearn said. "The hard part is always getting everybody to put pen to paper. But this was a major effort from all parties to get this over the line. You had rival promoters, rival networks and rival fighters."

Hearn says that a number of venues have already expressed interest in hosting the superfights.

"I actually feel we've done the hard part," Hearn said of what comes next. "Speaking for myself, Anthony and his team at 258 MGT, I know how hard we've worked hard these last couple of months and I just feel that this fight is so big it's not a difficult sell. We've already had approaches from eight or nine sites. The offers have come from multiple countries in the Middle East, from Asia, Eastern Europe and America."

Joshua (24-1) is coming off of a ninth-round knockout of Bulgaria's Kubrat Pulev in London last December. Fury (30-0-1) was last action came over a year ago when he defeated Deontay Wilder by TKO in the seventh round of a title bout in Las Vegas.

ESPN reports that the agreement calls for a 50-50 purse split in the first fight and a 60-40 split for the victor in the rematch.