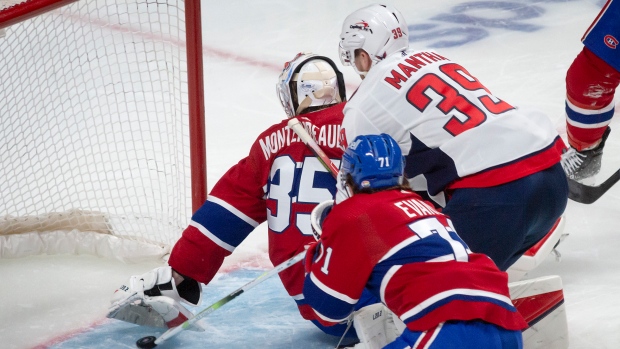 MONTREAL — Anthony Mantha didn’t have the chance to play in Montreal this season because of a shoulder injury that kept him out of the Washington Capitals lineup for four months.

The Longueuil, Que. native made it count on Saturday night with two goals in 34 seconds and two assists as the Capitals crushed the Canadiens 8-4 at the Bell Centre.

“It’s really good (for confidence), especially in games like these in Montreal,” Mantha said. “My family and friends are here, I can’t wait to see them. I’ll try to continue on that run and build up as much confidence for the playoffs.”

Capitals coach Peter Laviolette said injuries like Mantha’s have periods of rehab where “there’s no light at the end of the tunnel.” The veteran coach was glad to see the 27-year-old perform ahead of his team’s regular-season home stretch.

“It's really good having him back because of his size, because of the way you can be physical, his skill level and the way he can contribute to our team when he's on his game,” he said. “It's nice to see him get back and get into a rhythm and be able to contribute.”

The Capitals (42-23-10) started a five-game game road trip with a 7-3 loss to the Toronto Maple Leafs but redeemed themselves with a flurry of goals in Montreal.

“We had a couple guys who had big nights,” Laviolette said. “But I think everybody was looking for a little bit of redemption coming off the last game where we didn't play the way we wanted to play.”

For St. Louis, Mantha’s two goals scored on four-on-four, were difficult to come back from.

“We fell on four-on-four and they scored two goals, Washington is good with space,” St. Louis said. “I’ll take a bit of blame for that because, honestly, I can’t say we worked a lot on four-on-four concepts. Those goals hurt us.”

Montreal (20-45-11) recovered at the start of the third period with Poehling's second of the night but Washington responded, leaving the Habs with a five-game losing streak.

“The fifth goal hurt, the bubble burst at that moment,” St. Louis said. “There is a little bit of hope when we make it 4-3 but they make it 5-3 on the next shift, the bubble bursts and it’s tough to get back in the game. You saw it in the third, their players had confidence and moved the puck well.”

Dowd gave the Capitals an early lead by deflecting Orlov’s shot off his stick at 12:23 of the first period.

Evans levelled the score at 1:56 of the second period with a slap shot from the top of the right faceoff circle.

Mantha scored two consecutive goals to regain the lead. The forward recovered the rebound from his own shot to score his first of the night.

He then beat Montembeault with a wrist shot 34 seconds later to give Washington a two-goal lead.

Montreal cut its deficit to one goal when Jeff Petry and Poehling combined on a one-timer.

Washington got back up by two goals when Ovechkin, left alone in the slot, scored his 47th marker of the season.

Poehling scored his second of the night by picking up a loose puck in the slot and beating a distracted Vanacek.

Oshie’s power-play goal at the 16:35 mark of the final frame sealed Washington’s win.

This report by The Canadian Press was first published April 16, 2022.