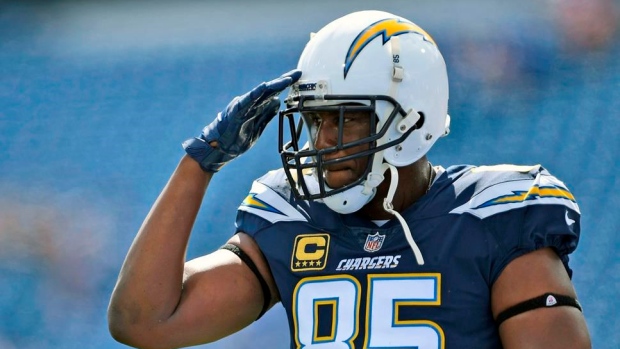 COSTA MESA, Calif. — Antonio Gates was hoping to get a final chance at reaching the Super Bowl.

However the teams that he thought would be a good fit ended up not making the post-season.

Gates said during a conference call on Wednesday he received some calls at midseason about playing, but that he was waiting to see how the playoff field would develop. Gates is retiring following a 16-year career, all with the Chargers.

“Looking back at the season I was optimistic of coming back and having the opportunity win. I know how injuries occur, kind of like how Marshawn Lynch came back,” he said. “About Week 12 or 13 things looked like they weren’t going to happen and I felt like it was time to move on.”

Gates said he still kept in touch with the Chargers, but they were out of contention by mid-November. He thought that the Colts would be a fit because of his relationship with coach Frank Reich, but late-season losses to Houston and Tennessee also knocked them out.

Gates played football at Detroit Central High School but didn’t in college. He originally went to Michigan State to play football and basketball but left when Nick Saban only wanted him to play football. Saban told Gates he had the talent to be a first-round pick, but Gates said he didn’t believe him.

He transferred to Eastern Michigan but would eventually end up at Kent State, where he led the school to the Elite Eight in the 2002 NCAA men's basketball tournament. He held two workouts for teams before being signed by the Chargers in 2003.

“My basketball skills helped me transition,” Gates said. “Having the opportunity to play basketball I learned the fundamentals to jump to the highest point. At 6-foot-4 and going against bigger guys I had to learn angles because I was undersized in basketball. Being able to rebound and take that to football I became a matchup problem.”

Gates retires as one of the top tight ends in league history. He was a three-time All-Pro and his 116 touchdowns are the most at the position in league history along with eight seasons where he scored eight or more TDs.

Gates’ 955 receptions and 11,841 yards are third among tight ends in league history. He will be eligible for consideration for the Pro Football Hall of Fame beginning with the Class of 2024.

When asked why he feels he deserves discussion for a spot in Canton, Gates pointed to being a red zone threat.

“When I got to the league, tight ends weren’t catching touchdowns like that. My 13 touchdowns (in 2004) were a big deal. What I was doing at the time, I didn’t realize, is I was making a mark at the position. Tony (Gonzalez) and Shannon (Sharpe) were playing at a high level but they were pass catching tight ends for the most part. Red zone wasn’t their forte. As I became a red zone threat, every team started to look for that.

“I think I had more respect from defensive co-ordinators than any other tight ends in the game. I was always faced with a defensive back it was very rare going against a linebacker. That’s how I would like to be judged.”