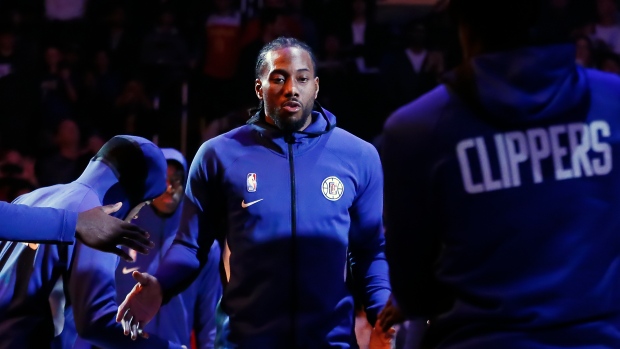 LOS ANGELES – Kawhi Leonard was the last player on the court following Clippers practice on Saturday afternoon. He took passes from good friend Jeremy Castleberry and launched mid-range jumper after mid-range jumper. So, his usual routine.

On the opposite end of the gym, Paul George had just finished his first full workout with the club. Soon he’ll be paired with Leonard and the two forwards will headline one of the league’s deepest and most talented teams – a frontrunner in the loaded Western Conference.

Outside the Playa Vista training facility, temperatures reached 92 degrees. It was another warm and sunny November day in Southern California.

Life is good for Leonard. The 28-year-old is coming off his second NBA championship and Finals MVP award and is a few weeks into his first season playing at home.

In the coup of the summer, Leonard recruited George and chose to join forces with the Clippers over building a super team with the Lakers or returning to the title-winning Toronto Raptors. He doesn’t seem to regret that decision.

“I’m able to see my family after the games,” Leonard told reporters when he was finally finished with his post-practice shooting session. “I’m in Southern California, beautiful weather, I’m at my house. Everything’s been good.”

With the Raptors in town to face the Clippers in the second night of a back-to-back on Monday, Leonard will reunite with many of his former teammates for the first time since they won a championship together last June.

These occasions tend to be awkward – when a star player faces the team he just abandoned – but this has a different feel to it. Both parties have moved on and everybody seems genuinely excited to see one another. There’s no bitterness and no resentment, just mutual respect and a unique experience that each of them are grateful to have shared.

“It’s not like he left on bad terms,” Clippers head coach Doc Rivers said. “It’s one of those ‘leave good’ situations, not one of those ‘leave awful’ situations. Let’s be honest, in our league it’s usually the other way. He’s had the rare benefit of leaving in happy state. Has it happened [before]? I don’t know. If it has, it’s rare.”

The Raptors knew what they were signing up for when they acquired Leonard from San Antonio ahead of the 2018-19 campaign – the final year of his contract. It was no secret that he had hoped to be traded to one of the Los Angeles-based teams. At the time, the belief was that he had no interest in playing for Toronto, though he disputes those reports to this day.

“I never went in with a negative mindset,” he said. “Playing with Cory Joseph in San Antonio, him being from that area in Toronto, I knew what the city brought. Just going out there, playing games, hanging out with him and his friends, him taking me around, showing me the city. I always felt positive with the trade and the front office. I knew it was great already with Masai being in there. So it was never a negative thing. I was always open-minded about it.”

Regardless of how he felt about his new team, or if he would’ve preferred to play elsewhere, Leonard made the most of his time in Toronto. He was the consummate professional. He bought in, worked hard, and come playoff time, when he battled a nagging knee injury, he gave the team everything he had and led them to their first NBA championship.

Internally, the team grew increasingly confident that they could keep Leonard late in the season and felt they had a very real shot as the playoff run reached its apex, but they were always aware of what they were up against. There’s some vindication in knowing that they did everything they could have. They managed his health, earned his trust, and won a championship together.

He considered sticking around, and may have if the Clippers were unable to acquire George from Oklahoma City, but the lure of playing at home was too strong. The climate, the proximity to Leonard’s friends, family, where he grew up and is most comfortable – those were things the Raptors were never going to be able to match.

The Raptors got it. His teammates got it. They were obviously disappointed, but they understood. It’s the reality of the business – free agents can choose their destination, and Leonard had more than earned the right to do whatever would be best for him and his family.

“It’s great,” George, also a California native, said of being home. “Walking outside when it’s 70-80 degrees, I haven’t been used to that in a very long time. It’s amazing for it to be November and the weather is amazing. I can go to the beach, take my kids out to do stuff. It’s amazing when it comes to that.”

“The good things [about playing at home] are you get to be home, you get to live in your house, you get to be in your crib that you probably paid a lot of money for, and you get to see your family and friends whenever you want,” said Kyle Lowry. “Whatever makes you happy. When you have the opportunity to choose where you want to go, you take advantage of it.”

Playing in your hometown is not for everybody, as the Philadelphia native pointed out. Lowry said he would do it now, if the opportunity presented itself, but doesn’t think he would have been able to handle the pressure and demand that it brings earlier in his career. However, Leonard has always had a knack for blocking out the noise and staying disciplined.

“I think it’s just how I was brought up,” the superstar forward said. “I never really read the newspaper articles, just focused on my game. I came from not being ranked to going to a D1 scholarship and then drafted in the NBA. Outside noise doesn’t mean anything to me. It’s just about me, the group and team that I’m with, the organization that I’m with now and focusing on that goal.”

The Clippers are 6-3 going into Monday’s game against Toronto, though two of those losses came with Leonard sitting out for rest. With a deep rotation and George getting closer to making his debut, it’s not hard to envision a path that leads Leonard back to the Finals.

Still, even though Leonard feels good about his decision, he looks back at his brief but meaningful time in Toronto with fond memories.

“The guys, the journey, also the country, the city, it was amazing,” he said. “Just so much, you can keep going on and on.”

He’s still feeling the love from Canadians he runs into south of the border.

“I was just telling someone the other day, it’s shocking to me how many Canadians do live here or are just visiting,” said Leonard. “Just walking around, people say I’m from Toronto or Winnipeg or these different cities in Canada. You never know unless you go play up there and they recognize your talent from playing with the Raptors.”

The Raptors have also turned the page. They’re 7-2 to open the new season, coming off an unlikely win over LeBron James, Anthony Davis and the Lakers without the injured Lowry and Serge Ibaka in the first half of the L.A. back-to-back on Sunday.

The championship experience has given them an air of confidence and, in the absence of Leonard, young players like Pascal Siakam, OG Anunoby and Fred VanVleet have taken their games to another level. Expectations have changed without Leonard, at least in the short-term, but the franchise’s future remains bright.

Leonard and the Raptors are headed in different directions, but they’ll have a chance to reminisce when their paths cross on Monday night at Staples Center.

“It’s gonna be great to see Kawhi,” Nick Nurse said after his team’s win over the Lakers on Sunday. “You go through something like that [together], you’re fighting it out for a couple of months, you get a special experience there. In saying that, I’m gonna stay up late tonight to try to devise some kind of scheme to make life very difficult on him tomorrow.”

“It’s a former team I won a championship with but it’s any other game,” Leonard said. “It’s going to be fun to see the guys again, and just congratulate them and be able to shake hands and compete.”