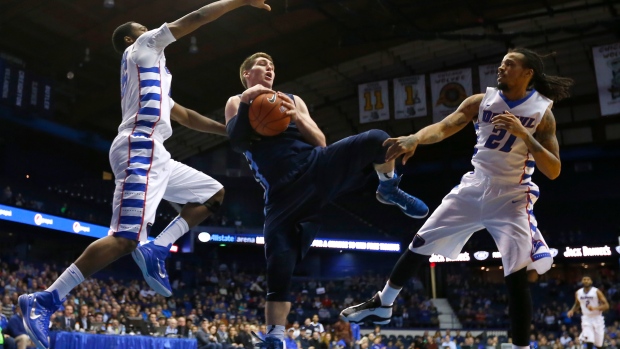 Rosemont, IL (SportsNetwork.com) - Ryan Arcidiacono scored all of his 18 points in the second half to lead No. 7 Villanova to a 68-55 win over DePaul on Saturday.

JayVaughn Pinkston went 10-for-10 from the free throw line on his way to 14 points, Darrun Hilliard added 11 points and Daniel Ochefu posted seven points with 12 rebounds in the win.

Billy Garrett Jr. netted 14 points and was the only double-figure scoring effort for the Blue Demons (11-12, 5-5), who have lost three straight.

Villanova, which was down by as many as 11 in the first half, trailed by six at halftime, and Arcidiacono tied it at 41-41 with a four-point play early in the second. That was part of a 10-0 run that Pinkston capped with a pair of free throws for a 45-41 edge.

Tommy Hamilton IV dropped in a 3-pointer prior to the under-eight media timeout that cut the DePaul deficit to three. Kris Jenkins then followed two more free throws from Pinkston with a trey that made it a 54-46 Villanova lead.

Arcidiacono knocked down a 3 with under three minutes remaining for a 63-52 edge that essentially sealed it for the visitors.

Garrett and Forrest Robinson each converted a 3-pointer during an 11-3 run that helped DePaul push its lead to 28-17 with around seven minutes remaining in the first half.

The Wildcats responded with an 8-0 burst, and they cut the deficit to one moments later on Josh Hart's layup.

The Blue Demons scored the final five points of the half, however, and led 37-31 at the break.