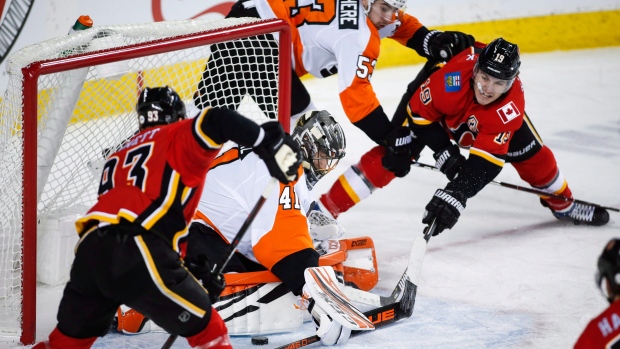 Score effects are an established phenomenon in sports and particularly so within the National Hockey League. Score effects can be behavioural or strategic, but more generally they explain how team performance changes with two factors under consideration: score and time.

Hockey fans know full well the power of score effects. Ever cheer for a team with a lead late in a game? Then it’s likely that you have watched as five-man unit after five-man unit from that team play as conservatively as possible. It’s a lot of chipping pucks out of the defensive zone, avoiding any sort of transitional gambles that could leave defensive units exposed and playing to the clock. The idea is that time running out becomes more desirable than scoring a goal at some point.

Separately, you have an opponent that is comparatively incentivized to play more aggressively, taking more chances and risks in all areas of the ice. So if it seems like leading teams struggle in the final few minutes to do much of anything (and trailing teams can seemingly do anything they want), well, that’s because it’s mathematically true.

Consider just the 2018-19 season. We can easily graph out how the shot share changes as teams play with a lead, and further observe how that changes when a team is on home ice or on the road. Generally speaking, conservatism for the leading team and/or heightened aggression for the trailing team begins at the start of the third period and erodes with each minute elapsed. 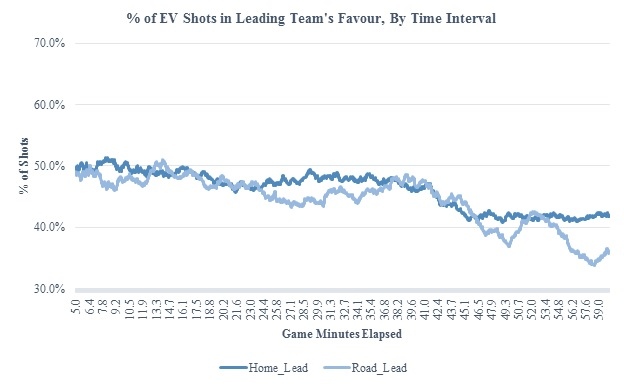 This is math acting as supporting evidence for what our eyes see – as teams become increasingly incentivized to change the way they play due to time constraints, performance changes. Home teams are a bit more insulated for all of the obvious reasons, but regardless of where a team is playing, they are seeing disparate results with time as they continue to watch the clock.

But the hardcore hockey fan might have noticed something interesting. Home teams results don’t appear to change much in the final 15 minutes of the game. Whether there is 10 minutes left on the clock, or five minutes, or two minutes, home teams are generally getting around 43 per cent of the shots as they try to put the game away.

This appears to be a marked change from what we have seen in seasons past. Consider 2010-11 as one example. I have graphed how home teams have owned the shot share over time in the same manner, but this time comparing 2010-11 home teams to 2018-19 home teams. Something has changed: 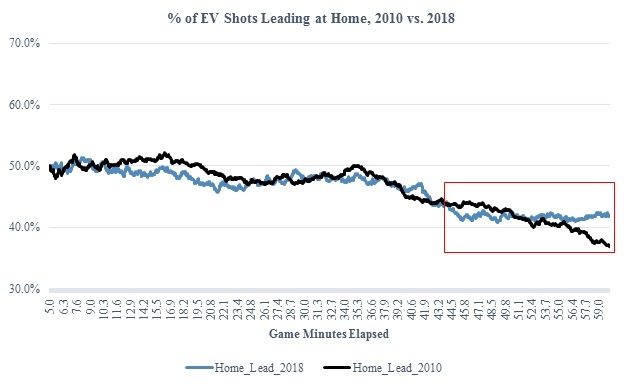 Whereas the home team sees relatively stable results for the final 15 minutes this season, that wasn’t the case years ago. Teams in 2010-11 saw consistently degrading results until the clock hit zero – in the final five minutes of a game, they would consistently sit below 40 per cent.

And here’s what is fascinating. This seems to be mostly a home-ice phenomenon. If you look at the same exact graph but for road teams with a lead, the results look identical: 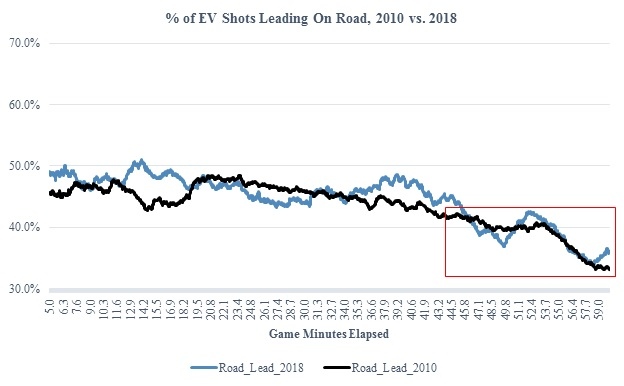 I highlighted the same final five minutes as we saw with home teams and the results are identical. In fact, the results are virtually identical at every interval, save for the choppiness observed from the sampling data. What we have here is an interesting question: What is it that teams are doing on home ice to stave off score effects that they can’t seem to duplicate while on the road?

I think that is the right way to phrase the question, but it technically could be asked another way: Why are road teams less effective in 2018 – relative to our prior period – at generating opportunities for themselves when chasing the game?

A fascinating little development I think, though I don’t have any obvious conclusion as to why this is occurring just yet.

One thought is that teams have become increasingly aggressive with pulling goaltenders – not only are we seeing teams down one pulling goalies earlier, we’re also seeing a higher frequency of teams pulling their goalies when down multiple goals. But goaltender pulls create a non-5-on-5 matchup, and that data wouldn’t directly be captured here. Only the threat of a goaltender pull could, theoretically, influence how both teams behave.

Another more direct and obvious theory is that some teams have recognized that extreme conservatism late in games leads to diminishing results, and that, to some degree, score effects late in games have been coached out of players. But not only is that merely speculative, it doesn’t answer why road teams don’t have the same ability to mitigate score effects the same way home teams do this season.

So, I leave it to the readers. What are you seeing late in games that could be influencing how teams are playing this season?