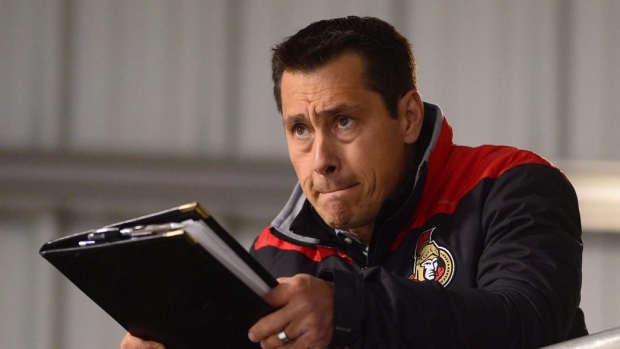 When head coach Guy Boucher was brought to Ottawa in May of 2016, the organization adopted a defence-first mantra.

It was a shift that made sense for the Senators. For a team that’s been pretty respectable in the standings in the modern era, few clubs have struggled quite like Ottawa in the defensive third. When they’ve been good, they’ve been able to smooth over their defensive issues with a high-powered offence. When they have struggled, the defensive issues have persisted, and the offence hasn’t been able to come together.

This season, Ottawa is exactly where they usually are – in the thick of things in the Atlantic Division. The Sens are never good enough to seriously challenge for a championship, but never poor enough to be in serious lottery position. The numbers behind this season look quite different than seasons past, though. The offence has been effectively neutered, but they have cut goals against down considerably.

All Boucher has done, it seems, is tip the seesaw in another direction. If you are general manager Pierre Dorion, maybe you think this type of play is more forgiving come playoff time. But you might also look at the team’s -4 goal differential and wonder if the trade-off has been worth it.

The story really sticks out within the team’s defensive pairings, especially since they’ve been mostly consistent all year long. Erik Karlsson heads the first pairing, and he’s played predominantly with Marc Methot. Cody Ceci and Dion Phaneuf have anchored the second pairing and have been given a large role under Boucher — the idea being that this group would be the defensive pairing of the three. The third duo has usually been Mark Borowiecki and Chris Wideman.

If you want to tell the story as to how things have changed in Ottawa, ice time is the starting point. We can make a direct comparison against what Dave Cameron did last season to what Boucher is doing this year. (Data via hockeyanalysis) 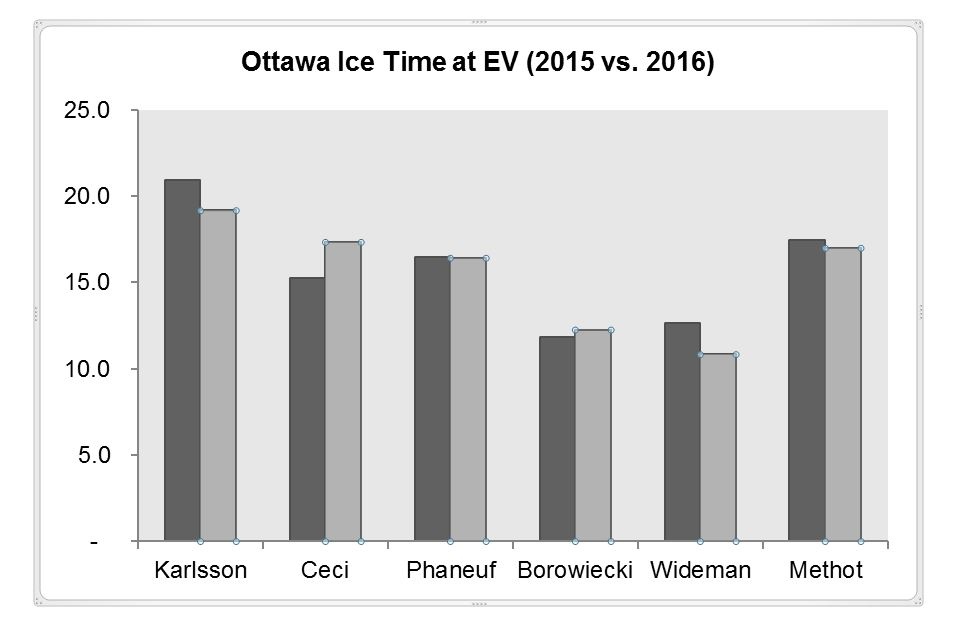 There’s not a single demonstrable change under Boucher here, but there are two moderately noticeable ones: a decrement of ice time for the first pairing (specifically Karlsson), and a notable shift of that ice time to his second pairing (and Ceci). On a per-game basis, the change is worth about three or four shifts.

I find this development fascinating for three reasons. One, it’s not often you see a coach claw back the ice time of maybe the league’s best defensive player. I think there’s a very real argument to preserving a guy’s legs so that he can pick up that ice time as the games become more prominent, and maybe that’s what Boucher is doing with Karlsson – keeping him bubble-wrapped, at least in a relative sense, until the stretch run really hits.

Let’s look at the Karlsson pairing first. Before Boucher arrived, Karlsson and Methot were one of the league’s preeminent pairings. This year? Well, not so much. (Note: “Off” indicates that the pairing was off of the ice.)

The thing to note here is that Karlsson/Methot Corsi% has plummeted in the new system, to the point that the Sens are actually better from a shot advantage standpoint when they are off the ice. A second note: while the goal differential seems fantastic, it’s almost exclusively goaltender driven. Ottawa goaltenders have stopped 94.5 per cent of shots with the Karlsson/Methot pairing together this year, which is impossibly high. Their four-year SV% at 5-on-5 before this year was, as you might have guessed, right around league average (92.5 per cent).

You can see that materialize in just the goal rates for the pairing. Look at how much their offence has tapered. Keep in mind that, again, the goals-against rate has plummeted almost exclusively from a fluky high save percentage rate – not from limiting shots.

So, Ottawa’s first pairing is both playing a bit less and is seemingly less effective. Considering their basically unblemished pre-Boucher track record, I think the most likely explanation for their reduction in performance can be tied to the system versus individual player or aggregate pairing talent.

Now let’s look at the second pairing which was assembled at the time of Phaneuf’s acquisition in 2015-16. There’s significantly less data, but the Ceci/Phaneuf group has now been together for about 700 minutes – enough to get a good feel as to whether this group is truly impactful or not, and whether they are providing the incremental defensive gains Boucher envisioned when taking over.

Here’s how that duo has performed in that 700-minute window:

This is not the stable second pairing former GM Bryan Murray was aiming for when he acquired Phaneuf in the big multi-player deal during his tenure, nor can it be the product that Dorion desires. At 700 minutes they are in the red on both goals and shots, and it’s not particularly close.

The thing that’s killing this pairing is that they offer almost nothing in terms of offence, and this comes back to the larger see-saw point I made earlier. At some point you need to score goals, and Ottawa never does when the second pairing is out there. Just look at their goal-for versus goal-against splits since assembly:

Ottawa gives up goals at the same rate whether Ceci/Phaneuf are on the ice or off of the ice. If they are your shutdown defensive pairing, how do you reconcile the zero variance here? And, of course, there is the larger issue of painfully little goal scoring as a unit. If you were curious as to how their 1.7 goals for per-60 minutes stacks up league-wide against other regular pairings since 2015, only two duos have been less effective – Adam Larsson and Andy Greene in their New Jersey days, and Josh Gorges and Rasmus Ristolainen for Buffalo. Both pairings play on teams that have been fixed lottery contenders with little talent across the roster. It’s not exactly good company.

At the end of the day, I think you have to ask at the midway point whether or not this team is any better under Boucher. They certainly appear like a different team. But, when you start adding everything up, it’s as if Ottawa has just sacrificed offence at the altar of better defence. And that better defence part? It’s still up for debate.