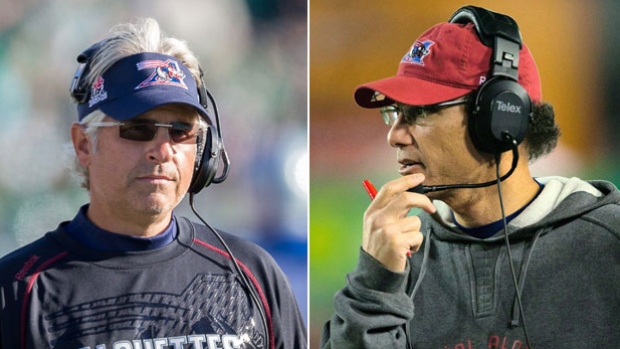 Jim Popp and Marc Trestman are together again, as the Toronto Argonauts have agreements in principle for Popp and Trestman to become the CFL club's GM and head coach, respectively.

Popp is expected to meet with reporters Tuesday morning at BMO Field in a news conference that can be seen live on TSN and TSN GO at 10:30am et.

Popp was photographed sitting with Larry Tanenbaum during the Toronto Maple Leafs’ 5-4 overtime win over the Winnipeg Jets on Feb. 21 at the Air Canada Centre. Tanenbaum is chairman of Maple Leafs Sports And Entertainment, which owns the Leafs, but he is also the Argos co-owner.

Popp hired Trestman as Montreal's head coach in 2008. The move paid off immediately as Trestman led the Alouettes to a Grey Cup appearance in his first season, losing 22-14 to Calgary at Olympic Stadium.

During Trestman's tenure, Montreal finished atop the East Division four times, posting a 59-31 regular-season record and a 5-3 playoff mark. Trestman was hired as the Chicago Bears head coach in 2013, a post he held for two seasons before being fired after compiling a 13-19 overall record.

The Baltimore Ravens hired Trestman to be their offensive co-ordinator but fired him in December after just 21 regular-season games on the job.

It's unclear who'll be on Trestman's staff in Toronto but a source confirmed Monday Trestman has spoken to Corey Chamblin, the former Saskatchewan Roughriders head coach who was fired during the 2015 season. But the source added no formal offer was made to Chamblin — who has also served as a defensive backs coach and defensive co-ordinator in the CFL — to be part of the Argos' coaching stafff.

Toronto finished last in the East Division last season — their first under new ownership and playing at a revamped BMO Field — with a dismal 5-13 record. However, the club waited until Jan. 24 to fire GM Jim Barker, who still has two years remaining on his CFL contract.

While the timing of the moves is hardly ideal, the addition of Popp and Trestman certainly gives the Argos a proven commodity on and off the field.

Popp has established himself as one of the CFL’s top GMs, also earning a Grey Cup ring in 1995 as the Baltimore Stallions general manager. In 2011, he was named executive of the year by Sports Media Canada.

But the 52-year-old native of Elkin, N.C., proved ineffective as a head coach, posting a 22-36 regular-season record and 1-4 playoff mark in four separate stints on Montreal’s sidelines.

He was fired as coach last September, with Montreal at 3-9. Interim coach Jacques Chapdelaine finished the season 4-2 and was named full-time coach in December by Kavis Reed, Popp’s successor as GM.