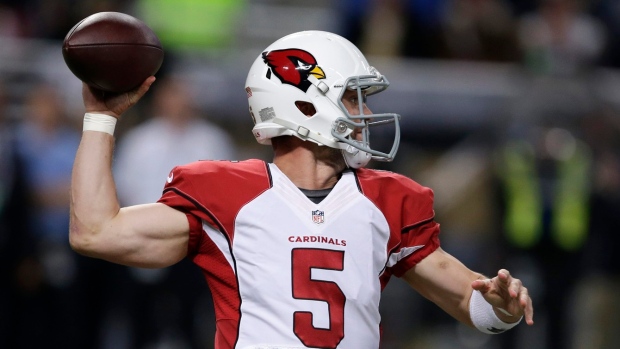 TEMPE, Ariz. - The Arizona Cardinals have taken another big injury hit, but it could have been worse.

"We feel he definitely has a chance to be back this season," the coach said. "We just don't know when."

Asked if there was any chance Stanton could play in the next game, a crucial NFC West showdown against Seattle on Dec. 21, Arians said, "I wouldn't put it past him but I would be surprised."

He would not specify what the injury is but multiple reports said Stanton has a sprained knee.

"I'll just sit down and think about which one I want," Arians said.

Lindley finished the game after Stanton was hurt in the third quarter of Thursday night's 12-6 win at St. Louis, a victory that virtually guaranteed Arizona a spot in the playoffs.

Lindley, the fourth quarterback to play for the Cardinals this season, was the No. 3 quarterback for Arizona last season but was released in favour of Thomas at the end of this preseason. The Cardinals signed him off the San Diego practice squad after starter Carson Palmer went down with a season-ending knee injury, also against the Rams, on Nov. 9.

Arians said Lindley had "the poise and confidence I knew he would have" after he went in against St. Louis.

"They had some exotic blitzes," Arians said. "He was on top of his protections and his hots and sights. ... If Logan had gone in, he would have got some stuff he'd never seen before. Ryan, I knew, would handle that part of it better."

Stanton, who had not taken a regular-season snap in four years before this season, is 5-3 as a starter in relief of Palmer.

Arizona was leading 9-3 Thursday night when Stanton was sacked and stayed on the ground in pain. He hopped off the field on his left leg and, a short time later, was carted away, getting a high-five from Lindley as he left.

Arizona has the best record in the NFL and would have the No. 1 seed in the NFC by winning out because the Cardinals have a better conference record than Green Bay (10-3). The Cardinals, who hadn't won 11 games in a season since 1975, have assured themselves a playoff spot except in the highly unlikely even that Sunday's Dallas-Philadelphia game ends in a tie.

They have succeeded despite injuries that have knocked out some of their best players — such as defensive tackle Darnell Dockett, outside linebacker John Abraham and, most recently, running back Andre Ellington — for the season and sidelined others for a few games, among them wide receiver Larry Fitzgerald, defensive end Calais Campbell and safety Tyrann Mathieu.

The prospect of sending Lindley or Thomas against the fierce defence of surging Seattle is an ominous one, and it looks to be a supremely significant game.

If the Seahawks win at home against San Francisco on Sunday, they will be 10-4 and a game behind Arizona. If Seattle then beats Arizona, there would be a tie atop the NFC West with a game to play and the Seahawks would hold the tiebreaker by virtue of two wins over the Cardinals.

Arizona's hopes would seem to ride on its strong defence and its recently improved running game.

"Right now that's us," Arians said. "We've got to run the football. We've set a nice little pattern. This is going to be a great challenge because these guys are very good against the run and always have been. I think the biggest thing is not turning it over, and our defence continues to take it away. That's going to be our recipe for success."

The coach said that whichever quarterback plays, "it's just a matter of having him comfortable."

"Whether it's 10 plays or 50 plays, the menu doesn't have to be that large," Arians said, "as long as he understands where the ball should go and why it should go there."

Arians knows his team will be an underdog against Seattle. But the Cardinals are 7-0 at home, and this team has defied forecasts of doom before.

"I don't think there's a doubt in anybody's mind in that locker room," Arians said, "that we can win every game."