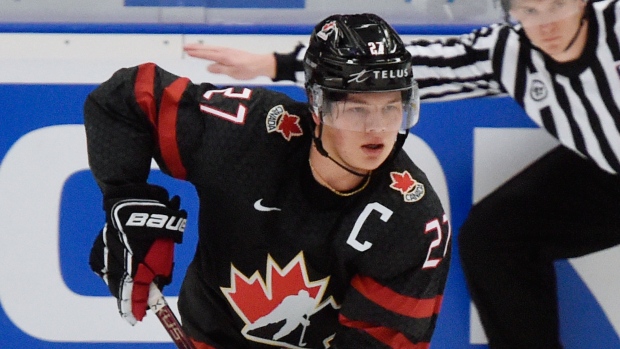 I​n the moments after an exhilarating victory ​in the championship game at the World Juniors in January, Barrett Hayton posed for a picture. The Peterborough, Ont., native had his gold medal in his mouth while holding the Canadian flag across his back.

The Arizona Coyotes honoured the 19-year-old's achievement by giving the forward a framed picture of that moment of victory. When Hayton returned to the desert, he posed for a picture with the gift.

"We were in the hall and the team was heading out and all the guys were walking by and giving me a hard time," Hayton recalled with a smile.

Yeah, you're going to want to hang that one up. 🖼️ pic.twitter.com/Mc9MeEULQb

The Coyotes roster is loaded with Americans and many of them had jokingly urged Hayton to bring home a silver medal after he was loaned to Hockey Canada for the event.

Arizona's management believed the tournament in Ostrava, Czech Republic would aid Hayton's development and he believes it absolutely did.

"A big thing for me was the leadership role," said Hayton, who served as Canada's captain. "Being able to go and lead that group, play big minutes, be a go-to guy, that's the kind of player I strive to be and the player I want to be in the NHL."

Hayton led the youngest Team Canada in World Juniors history to the country's first gold medal on European ice since 2008. It wasn't easy. Along the way, Hayton helped the team regroup following a 6-0 loss to Russia in the preliminary round, which was the most lopsided defeat in Canada’s history at the tournament.

There was plenty of other adversity, including a head-butting suspension that sidelined key centre Joe Veleno for a game and an injury to top-line winger Alexis Lafreniere, who missed the final two games of the round robin before returning in the knockout stage.

Hayton also had to overcome injury. He sustained a Grade 1 shoulder separation in the semifinals and didn't know whether he'd be able to play in the final, a rematch against Russia, until minutes before puck drop. Hayton eventually scored the tying goal during a dramatic third-period comeback.

"We had a tight-knit group," Hayton said. "Everyone was really close and had a lot of trust in each other. It was a roller-coaster tournament and there's so many different reasons why we were able to manage that. The biggest one was just having the leadership group that we did and the experience. We had a good group of returning guys and a lot of guys who, it was their first time at the tournament, but had that personality to hang in and deal with whatever was going on.​"

THE CAPTAIN COMES THROUGH! Barrett Hayton ties it for 🇨🇦! pic.twitter.com/xuM8cfReEX

Hayton spoke to TSN via Zoom this week from Arizona where he's living with Coyotes defenceman Jason Demers. Hayton explained how watching video of a young Jonathan Toews helped prepare him for life as a National Hockey League rookie and, of course, he ​also relived the magical run to World Junior gold. The following is an edited transcript of the conversation.

I want to ask you about some of your World Junior teammates. What's the first thing that pops into your mind when you think of top draft prospect Alexis Lafreniere?

"There are so many things. That's probably the worst one to ask for one thing. He's a funny guy. He's awesome. He has so much life and so much love for the game and, obviously, is a great guy to play with. That's the only one I'll cheat with and give a long answer."

How about Akil Thomas, who scored the game winner in the gold-medal game?

"Clutch. Growing up and playing against him, he was always like that. I remember in high school hockey he scored a game-winning goal at this big tournament, so that's just in his blood."

What about Joel Hofer, the tournament's top goalie?

"Calm. Nicest guy. I had never met him before. I joined the group late and sat beside him on the plane [to Europe] and got to know him. He had a great neck pillow and he offered me that after he slept. Can't say enough good things about Hof."

"Smooth. He's one of my favourite players to watch. I love his game so much. It's funny, me and one of my other buddies were talking the other day and he came up. He's just a great kid and I love his game."

"He's a genius. I don't know, like, he's just such a great hockey mind. To be able to have him there and just talk to him and bounce ideas back and forth, you really get to understand how high his hockey IQ is. Very fortunate to meet him and play for him."

Canada didn't play Sweden, but your old Ontario Hockey League teammate Rasmus Sandin had a heck of a tournament and was also impressive in making the NHL this year with the Maple Leafs. Have you been following his progress?

"Absolutely. Ras, to this day, is one of my closest friends. We talk every single day. We didn't end up playing them, but I followed along in the tournament and saw how well he was doing. He's a tremendous player and one of the most underrated guys out there. Definitely kept track of him."

What makes him underrated?

"Playing with him in the Soo, you just see his poise and his hockey IQ and his ability to be calm, smooth and effortless and do it at such a high pace and make the plays the he does. It was fun watching him play. He had some success in the NHL this year, so I don't think he'll be considered underrated for long."

Why did you guys hit it off?

"We just have a similar outlook on things. We're both driven and motivated, so I think that's where it started. We'd mess around after practice on the ice and shoot around and work on some things ... We like to have fun, have fun with the game and just very compatible. He's a great guy and fun to be around."

What did you learn from your NHL experience this season? How far have you come since your first game in October?

"It's night and day between my first game and the last game I played. The biggest thing is the experience and having a feel. I'm a big 'feel' player. I like to feel the game and react. Hockey IQ is my strong suit, so every time I'm able to get into a game and get that experience and learn is something that's a huge benefit to me."

You're used to logging big minutes in junior hockey, what was that adjustment like averaging only around 11 minutes per game with the Coyotes?

"That's a big adjustment and something every young player deals with when they first get into the NHL. I was able to watch a lot of video. I'm a big hockey fan so I was as prepared as I could be."

What were you watching and how did it help?

"You watch your own video from junior, but in making the step to the NHL I watched a ton of centres that I tried to emulate growing up to see how they played and what I could pick up. Also, watching some of their [early] games in the league to see the steps they've taken. What's fresh [in your mind] is what you see in their game now, but it's good to see the progression they've made."

Who are the centres you liked growing up?

"I loved Jonathan Toews. He was my go-to guy. [Patrice] Bergeron, as I got a little older, I watched his games a ton and more recently I’ve watched [Mark] Scheifele and Auston Matthews, his offensive ability has been tremendous. So, those are the four that I've watched the most and learned from."

What did you notice watching a young Toews?

"Just his versatility is something I don't think he really gets credit for. Early on he was playing a little bit more of an offensive role and something that got overshadowed when they went on all those runs is how much of a 200-foot player he really was. The fact he was playing at such a young age in those high-compete situations and taking those defensive-zone faceoffs and being out late in the game ... that's something that I [noticed]. I watched some of his first-season games actually and it was cool to see how good he was right away, but also seeing the player he turned into. I'm just trying to learn from that."

What's the biggest challenge you face coming into the NHL so young?

"It's obviously different for each player, but the pace and just thinking the game at a fast pace. Juniors are tough at 16 or 17 and you learn how to think the game and dissect the game and find your holes and see where you can find success. I think it's kind of like that here, but it's a new level. It's the best league in the world so it's difficult, but it's a process and I've come a long way with that."

"I've been with him all season and it's taking on a new dimension here now that we're quarantined together and spending all this time together. He's an awesome guy who definitely keeps things interesting."

I understand he's teaching you how to cook. How's that going?

"It's been an ongoing thing, but definitely progressing well."

What were your cooking skills before?

"Before I was just kind of basic. I could cook common stuff like rice and pasta and some vegetables and chicken. Chicken was kind of my go-to and JD still kind of teases me for it, but I'm taking on some new horizons and been pretty successful."

Mark Masters chats with #Yotes forward Barrett Hayton about learning to cook during the #NHL pause and looking back on his time winning gold at the #WorldJuniors in January: https://t.co/2QQgNSfR6C #TSNHockey pic.twitter.com/jLD7joPJDu

"Honestly, I haven't made anything too impressive. I've been working on cast iron seared steak and stuff like that. I've done some surf and turf, so that's kind of been the best dish so far."