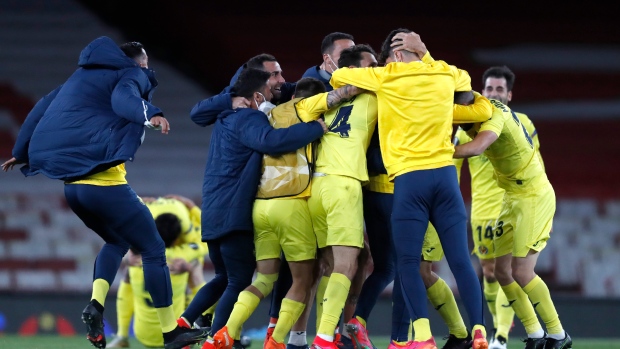 MADRID (AP) — Arnaut Danjuma scored five minutes into stoppage time as Villarreal salvaged a 3-3 draw against Cádiz in the Spanish league on Tuesday.

Danjuma got the equalizer with a shot from inside the area to keep Unai Emery's team from losing its third league match in a row.

Lozano scored twice in the first half and once after halftime to give Cádiz a two-goal lead until Boulaye Dia pulled the hosts closer in the 80th minute. Pau Torres had evened the match for Villarreal in the first half.

Cádiz has only one win this season and is one point from the relegation zone.

Villarreal, with only two victories, stayed in 12th place.

Athletic Bilbao was held by Espanyol to a 1-1 draw, missing a chance to get closer to the lead.

Athletic had won two in a row and could have gotten within two points of leader Real Sociedad with another victory.

Raúl de Tomás opened the scoring for mid-table Espanyol by converting a penalty kick in the 33rd. Iñaki Williams equalized for the visitors in the 52nd.

De Tomás was sent off in stoppage time after an altercation with an opponent.

Espanyol was unbeaten in three matches in a streak that started with a home win against Real Madrid.

Alavés edged Elche 1-0 at home to win its second consecutive match and leave the relegation zone.

Mamadou Loum scored the winner early in the second half.

Alavés had lost five in a row to start the season before beating defending champion Atlético Madrid and picking up some momentum. It moved to 16th place with Tuesday's victory, two points from the relegation zone.

It was the second loss in three matches for Elche, which sits 15th in the standings.

On Wednesday, Barcelona will try to rebound from the home loss to Real Madrid in the “clásico” when it visits Radamel Falcão’s Rayo Vallecano, which has won all of its four matches at home this season. Madrid can take the league lead from Sociedad with a home win against Osasuna.